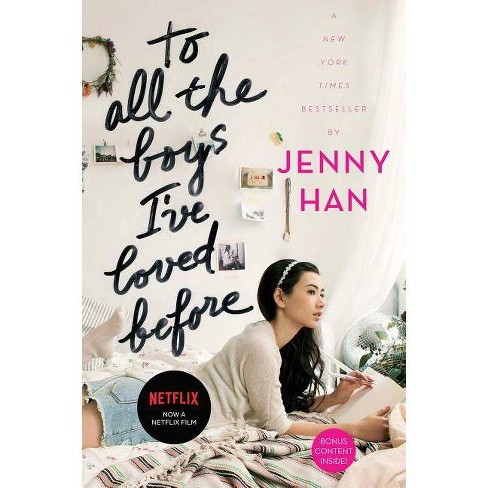 To All the Boys I've Loved Before is now a major motion picture streaming on Netflix! Lara Jean's love life gets complicated in this New York Times bestselling "lovely, lighthearted romance" (School Library Journal) from the bestselling author of The Summer I Turned Pretty series. What if all the crushes you ever had found out how you felt about them...all at once? Sixteen-year-old Lara Jean Song keeps her love letters in a hatbox her mother gave her. They aren't love letters that anyone else wrote for her; these are ones she's written. One for every boy she's ever loved--five in all. When she writes, she pours out her heart and soul and says all the things she would never say in real life, because her letters are for her eyes only. Until the day her secret letters are mailed, and suddenly, Lara Jean's love life goes from imaginary to out of control.

A wonderful choice for fans of Sarah Dessen and Stephanie Perkins.-- "Booklist" In this lovely, lighthearted romance...readers will remember the Song sisters and the boys in their lives long after the final page turn.-- "School Library Journal, STARRED REVIEW" One of the 15 Most Exciting Books of 2014-- "TeenVogue.com" This book is amazing.-- "HelloGiggles.com" An ultimately compelling exploration of teenage growth and young love.-- "Kirkus" Lara Jean's personality--goofy, awkward, prone to strong emotions, and entirely naïve when it comes to boys--give this touching story an individuality and charm all its own. Han creates a realistically flawed cast, especially half-Korean Lara Jean and her sisters, who work hard to be good to one another after their mother's death (even when they're at one another's throats).-- "Publishers Weekly, starred review"

Jenny Han is the #1 New York Times bestselling author of the To All the Boys I've Loved Before series, now Netflix movies. She is also the author of The Summer I Turned Pretty series, Shug, and Clara Lee and the Apple Pie Dream. She is the coauthor of the Burn for Burn trilogy, with Siobhan Vivian. Her books have been published in more than thirty languages. A former librarian, Jenny earned her MFA in creative writing at the New School. She lives in Brooklyn, New York.
If the item details above aren’t accurate or complete, we want to know about it. Report incorrect product info.