Who by Fire - by Matti Friedman (Hardcover) 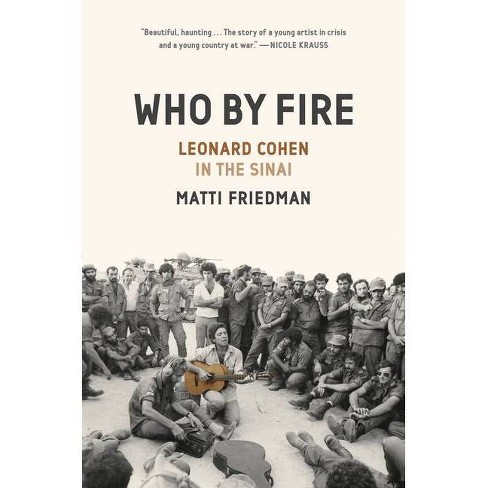 "An expedition into the troubled soul of one of the world's greatest songwriters."--Haaretz "Not only is a hidden side of Cohen revealed but so too a hidden side of Israel." --David BezmogisThe little-known story of Leonard Cohen's concert tour to the front lines of the Yom Kippur War, including never-before-seen selections from an unfinished manuscript by Cohen and rare photographs
In October 1973, the poet and singer Leonard Cohen--thirty-nine years old, famous, unhappy, and at a creative dead end--traveled from his home on the Greek island of Hydra to the chaos and bloodshed of the Sinai desert when Egypt attacked Israel on the Jewish high holiday of Yom Kippur. Moving around the front with a guitar and a group of local musicians, Cohen met hundreds of young soldiers, men and women at the worst moment of their lives. Those who survived never forgot the experience. And the war transformed Cohen. He had announced that he was abandoning his music career, but he instead returned to Hydra and to his family, had a second child, and released one of the best albums of his career. In Who by Fire, journalist Matti Friedman gives us a riveting account of those weeks in the Sinai, drawing on Cohen's previously unpublished writing and original reporting to create a kaleidoscopic depiction of a harrowing, formative moment for both a young country at war and a singer at a crossroads.

"A fascinating and intense account of Leonard Cohen's time in Israel during the 19-day Yom Kippur War of 1973. A must for any Leonard Cohen completist, with excerpts from his unpublished manuscripts from that time. Soulful and thoughtfully done."--Suzanne Vega "WHO BY FIRE is a stunning resurrection of a moment in the life of Leonard Cohen and the history of Israel. It's the story of a young artist in crisis and a young country at war, and the powerful resonance of the chord struck between them. A beautiful, haunting book." --Nicole Krauss "A short, symphonic book of remarkable stories of yearning, love, and war, whose leitmotif is a haunted artist bearing secret chords that enchant the world." --Rabbi David Wolpe "Matti Friedman excels at finding the great significance in forgotten things: forgotten manuscripts, forgotten wars, forgotten spies. In this account of Leonard Cohen's forgotten concert tour during the Yom Kippur War, not only is a hidden side of Cohen revealed but so too a hidden side of Israel. WHO BY FIRE is a book about the change that happens when you come through the flames." --David Bezmozgis"Friedman illuminates in this fascinating tale an extraordinary chapter in the career of singer and songwriter Leonard Cohen (1934-2016) that left a lasting impact on the state of Israel. ... This demonstration of the power of song will stun fans of the legendary artist." --Publishers Weekly (starred review)

"With remarkable insight, discipline, heart, scope, stunning reporting, and sometimes quite beautiful writing, Friedman has recreated those days of war and music, regeneration and humility, that freed Cohen to create some of his greatest works of art." --Mother Jones

Compelling... . [Friedman] beautifully ties together ideas about the author's craft, identity, and connection to Israel.... A brief, audacious, thorough book turning ... a dream world unconventionally and surprisingly real." --Pittsburgh Post-Gazette "A word-of-mouth treasure.... Offers vital insight into Cohen's trajectory as a songwriter and the scope of his work." -City Journal
"An important hybrid work of music and war reporting." -Mitchell Kaplan, Boca Magazine

MATTI FRIEDMAN is an award-winning journalist and author. Born in Toronto and based in Jerusalem, his work has appeared regularly in the New York Times, The Atlantic, Tablet, and elsewhere. Friedman's last book, Spies of No Country: Secret Lives at the Birth of Israel, won the 2019 Natan Prize and the Canadian Jewish Book Award for history. Pumpkinflowers: A Soldier's Story of a Forgotten War was chosen in 2016 as a New York Times Notable Book and one of Amazon's 10 best books of the year. His first book, The Aleppo Codex, won the 2014 Sami Rohr Prize and the ALA's Sophie Brody Medal.
If the item details above aren’t accurate or complete, we want to know about it. Report incorrect product info.