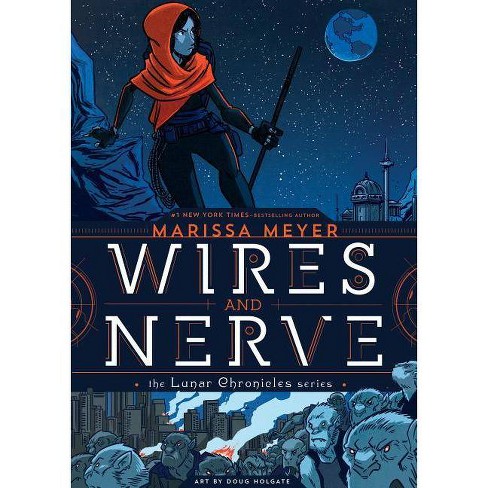 In her first graphic novel, bestselling author Marissa Meyer extends the world of the Lunar Chronicles with a brand-new, action-packed story about Iko, the android with a heart of (mechanized) gold.When rogue packs of wolf-hybrid soldiers threaten the tenuous peace alliance between Earth and Luna, Iko takes it upon herself to hunt down the soldiers' leader. She is soon working with a handsome royal guard who forces her to question everything she knows about love, loyalty, and her own humanity. With appearances by Cinder, Cress, Scarlet, Winter, and the rest of the Rampion crew, this is a must-have for fans of the bestselling series.

"The Lunar Chronicles continue in this entertaining graphic novel sequel to the existing volumes. This follow-up to the futuristic fairy-tale retellings centers on Iko, cyborg mechanic Cinder's best friend. Acclimating to her human body, the android is trying to help Queen Cinder of Luna ease tensions with Earth by hunting down rogue wolf-hybrid soldiers who were once enslaved by Cinder's evil stepmother and have now been banished to the green planet." --School Library Journal

"Meyer focuses on Iko, Cinder's cheeky sidekick and an assassin agent sent to hunt down the wolf-soldier hybrids that are plaguing Earth. Unlike some of the previous novels, this story doesn't require preexisting knowledge of the series, easily catching up fans and new readers alike with capsule introductions to Cress and other members of the Rampion crew in a prologue. Iko is an entertainingly flippant yet formidable heroine, a former servant droid who now inhabits an escort's body and takes on bloodthirsty enemies as though she were invincible." --Publishers Weekly

"Fans of The Lunar Chronicles and new readers alike will be delighted ... beloved worlds and characters have smoothly transitioned into graphic format, and a thorough character introduction and quick recap will help new readers feel right at home... Energetic and entertaining with the right balance of action, humor, and romance. Though Iko is the main protagonist, all of the major characters from the series are brought and employed wisely... Holgate's dynamic yet monochromatic artwork supplements the snappy dialogue and captures the characters' personalities and mannerisms beautifully." --VOYA, starred review

"A mash-up of fairy tales and science fiction...a cross between Cinderella, Terminator, and Star Wars."--Entertainment Weekly

"Takes the classic to a whole new level."--NPR

Marissa Meyer's first book in the Lunar Chronicles, Cinder, debuted on the New York Times bestseller list. Marissa lives in Tacoma, Washington, with her husband and their three cats.
If the item details above aren’t accurate or complete, we want to know about it. Report incorrect product info.