Zero to One - by Peter Thiel & Blake Masters (Hardcover) 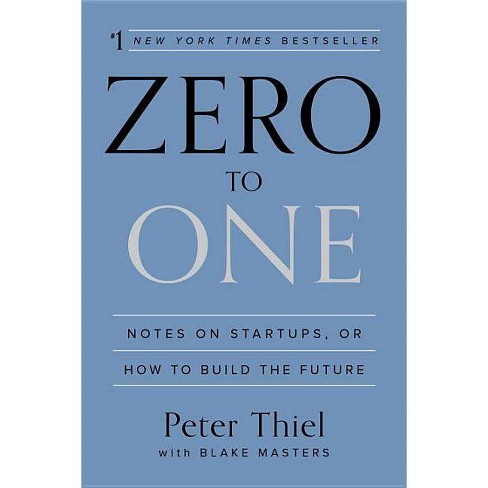 "EVERY MOMENT IN BUSINESS HAPPENS ONLY ONCE. The next Bill Gates will not build an operating system. The next Larry Page or Sergey Brin won't make a search engine. And the next Mark Zuckerberg won't create a social network. If you are copying these guys, you aren't learning from them. It's easier to copy a model than to make something new: doing what we already know how to do takes the world from 1 to n, adding more of something familiar. But every time we create something new, we go from 0 to 1. The act of creation is singular, as is the moment of creation, and the result is something fresh and strange. Zero to One is about how to build companies that create new things. It draws on everything I've learned directly as a co-founder of PayPal and Palantir and then an investor in hundreds of startups, including Facebook and SpaceX. The single most powerful pattern I have noticed is that successful people find value in unexpected places, and they do this by thinking about business from first principles instead of formulas. Ask not, what would Mark do? Ask: WHAT VALUABLE COMPANY IS NOBODY BUILDING? "--

#1 NEW YORK TIMES BESTSELLER - "This book delivers completely new and refreshing ideas on how to create value in the world."--Mark Zuckerberg, CEO of Meta

"Peter Thiel has built multiple breakthrough companies, and Zero to One shows how."--Elon Musk, CEO of SpaceX and Tesla The great secret of our time is that there are still uncharted frontiers to explore and new inventions to create. In Zero to One, legendary entrepreneur and investor Peter Thiel shows how we can find singular ways to create those new things. Thiel begins with the contrarian premise that we live in an age of technological stagnation, even if we're too distracted by shiny mobile devices to notice. Information technology has improved rapidly, but there is no reason why progress should be limited to computers or Silicon Valley. Progress can be achieved in any industry or area of business. It comes from the most important skill that every leader must master: learning to think for yourself. Doing what someone else already knows how to do takes the world from 1 to n, adding more of something familiar. But when you do something new, you go from 0 to 1. The next Bill Gates will not build an operating system. The next Larry Page or Sergey Brin won't make a search engine. Tomorrow's champions will not win by competing ruthlessly in today's marketplace. They will escape competition altogether, because their businesses will be unique. Zero to One presents at once an optimistic view of the future of progress in America and a new way of thinking about innovation: it starts by learning to ask the questions that lead you to find value in unexpected places.

"Crisply written, rational and practical, Zero to One should be read not just by aspiring entrepreneurs but by anyone seeking a thoughtful alternative to the current pervasive gloom about the prospects for the world."
- The Economist An extended polemic against stagnation, convention, and uninspired thinking. What Thiel is after is the revitalization of imagination and invention writ large...
- The New Republic

Might be the best business book I've read...Barely 200 pages long and well lit by clear prose and pithy aphorisms, Thiel has written a perfectly tweetable treatise and a relentlessly thought-provoking handbook.
- Derek Thompson, The Atlantic "This book delivers completely new and refreshing ideas on how to create value in the world."
- Mark Zuckerberg, CEO of Facebook "Peter Thiel has built multiple breakthrough companies, and Zero to One shows how."
- Elon Musk, CEO of SpaceX and Tesla Zero to One is the first book any working or aspiring entrepreneur must read--period.
- Marc Andreessen, co-creator of the world's first web browser, co-founder of Netscape, and venture capitalist at Andreessen Horowitz Zero to One is an important handbook to relentless improvement for big companies and beginning entrepreneurs alike. Read it, accept Peter's challenge, and build a business beyond expectations.
- Jeff Immelt, Chairman and CEO, GE

"When a risk taker writes a book, read it. In the case of Peter Thiel, read it twice. Or, to be safe, three times. This is a classic."
- Nassim Nicholas Taleb, author of Fooled by Randomness and The Black Swan

Peter Thiel, in addition to being an accomplished entrepreneur and investor, is also one of the leading public intellectuals of our time. Read this book to get your first glimpse of how and why that is true.
- Tyler Cowen, New York Times best-selling author of Average is Over and Professor of Economics at George Mason University The first and last business book anyone needs to read; a one in a world of zeroes.
- Neal Stephenson, New York Times best-selling author of Snow Crash, the Baroque Cycle, and Cryptonomicon Forceful and pungent in its treatment of conventional orthodoxies--a solid starting point for readers thinking about building a business.
- Kirkus Reviews

Peter Thiel is an entrepreneur and investor. He started PayPal in 1998, led it as CEO, and took it public in 2002, defining a new era of fast and secure online commerce. In 2004 he made the first outside investment in Facebook, where he serves as a director. The same year he launched Palantir Technologies, a software company that harnesses computers to empower human analysts in fields like national security and global finance. He has provided early funding for LinkedIn, Yelp, and dozens of successful technology startups, many run by former colleagues who have been dubbed the "PayPal Mafia." He is a partner at Founders Fund, a Silicon Valley venture capital firm that has funded companies like SpaceX and Airbnb. He started the Thiel Fellowship, which ignited a national debate by encouraging young people to put learning before schooling, and he leads the Thiel Foundation, which works to advance technological progress and long- term thinking about the future.

Blake Masters was a student at Stanford Law School in 2012 when his detailed notes on Peter's class "Computer Science 183: Startup" became an internet sensation. He is President of The Thiel Foundation and Chief Operating Officer of Thiel Capital.
If the item details above aren’t accurate or complete, we want to know about it. Report incorrect product info.