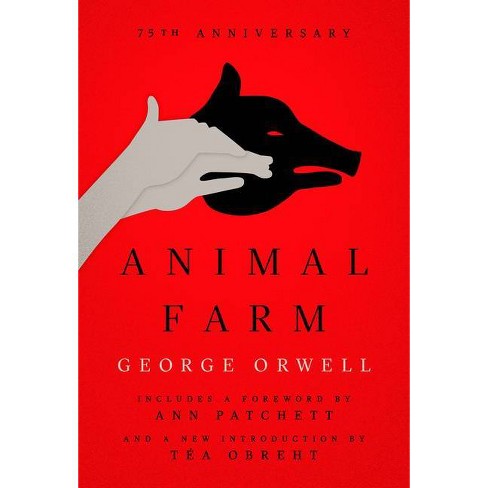 George Orwell's timeless fable is now released in a centennial edition with aForeword by Gore Vidal.

75th Anniversary Edition--Includes a New Introduction by Téa Obreht George Orwell's timeless and timely allegorical novel--a scathing satire on a downtrodden society's blind march towards totalitarianism. SOON TO BE A NETFLIX FILM! "All animals are equal, but some animals are more equal than others." A farm is taken over by its overworked, mistreated animals. With flaming idealism and stirring slogans, they set out to create a paradise of progress, justice, and equality. Thus the stage is set for one of the most telling satiric fables ever penned--a razor-edged fairy tale for grown-ups that records the evolution from revolution against tyranny to a totalitarianism just as terrible. When Animal Farm was first published, Stalinist Russia was seen as its target. Today it is devastatingly clear that wherever and whenever freedom is attacked, under whatever banner, the cutting clarity and savage comedy of George Orwell's masterpiece have a meaning and message still ferociously fresh. With a foreword by Ann Patchett

"Animal Farm remains our great satire on the darker face of modern history." -Malcolm Bradbury "As lucid as glass and quite as sharp...[Animal Farm] has the double meaning, the sharp edge, and the lucidity of Swift." -Atlantic Monthly "A wise, compassionate, and illuminating fable for our times." -New York Times

"Orwell has worked out his theme with a simplicity, a wit, and a dryness that are close to La Fontaine and Gay, and has written in a prose so plain and spare, so admirably proportioned to his purpose, that Animal Farm even seems very creditable if we compare it with Voltaire and Swift." -Edmund Wilson, The New Yorker "Orwell's satire here is amply broad, cleverly conceived, and delightfully written." -San Francisco Chronicle "The book for everyone and Everyman, its brightness undimmed after fifty years." -Ruth Rendell With an Introduction by Julian Symons

George Orwell (pseudonym for Eric Blair [1903-50]) was born in Bengal and educated at Eton; after service with the Indian Imperial Police in Burma, he returned to Europe to earn his living penning novels and essays. He was essentially a political writer who focused his attention on his own times, a man of intense feelings and intense hates. An opponent of totalitarianism, he served in the Loyalist forces in the Spanish Civil War. Besides his classic Animal Farm, his works include a novel based on his experiences as a colonial policeman, Burmese Days, two firsthand studies of poverty, Down and Out in Paris and London and The Road to Wigan Pier, an account of his experiences in the Spanish Civil War, Homage to Catalonia; and the extraordinary novel of political prophecy whose title became part of our language, 1984.
If the item details above aren’t accurate or complete, we want to know about it. Report incorrect product info.