Before I Go - by Brian Charles (Paperback) 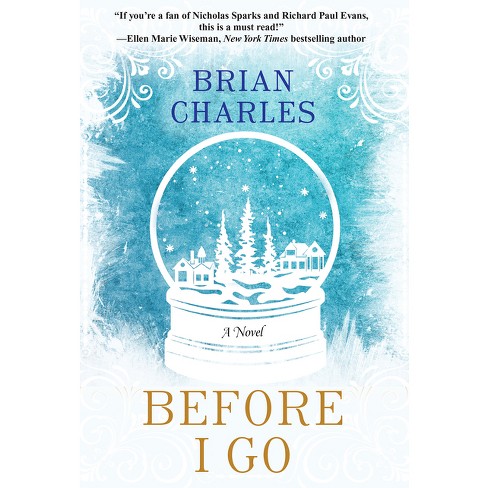 For fans of Nicholas Sparks, Mitch Albom, Charles Martin, and Richard Paul Evans, Before I Go is at once a tender love story with a twist, a profound portrait of life after loss, and an uplifting exploration of the numinous connections that give our lives meaning. The Notebook meets The Shack in this poignant tale about how the people we love stay with us forever...in sometimes surprising ways. A year after her husband's plane crashed into the Pacific Ocean, Abby Gamble knows she needs to start moving beyond her grief. She and Ben shared a deep love, made even stronger by the heartache they went through together. But Ben would want her to keep living. So Abby throws herself once more into her cosmetics company--only to find herself at a crossroads when she meets Joel, a physician whose past is as scarred as hers. Joel has never forgiven himself for a fateful childhood decision. That guilt has spurred him on to save other lives. When he meets Abby he begins to see a way forward, though Abby is holding back, struggling with the idea of finally leaving Ben behind. Yet Ben isn't gone. Ever since his plane went down, he's been trying to make his way back to Abby. That journey begins on an island thousands of miles away, as Ben discovers his journal among the wreckage debris that has washed up on shore--a series of letters that recounts Abby and Ben's love story. Rereading his letters about the life they planned, and the joy and misfortune they encountered along the way, Ben knows what he must do. Somehow, he must set out to see Abby again--even if he doesn't know what will be waiting for him in the extraordinary event that he makes it home . . .

Brian Charles was born and raised in Chicago and now lives in the suburbs with his wife and children. Before I Go is his debut novel. Readers can find him at BrianCharlesBooks.com
If the item details above aren’t accurate or complete, we want to know about it.

Secrets - (A Lost and Found Novel) by Fern Michaels (Paperback)

Before I Go - by Colleen Oakley (Paperback)

Before I Go - by Peter Kreeft (Hardcover)