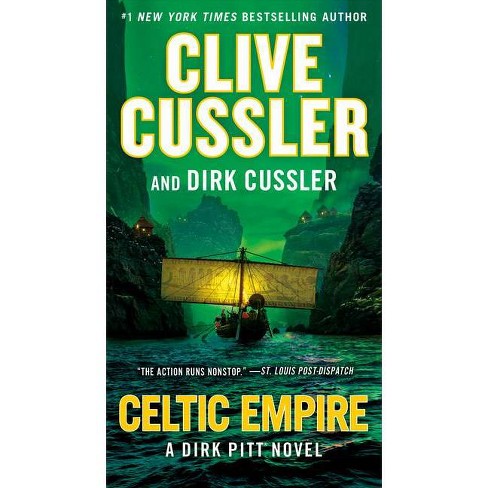 Includes excerpt from Journey of the Pharaohs.

Clive Cussler, The Grand Master of Adventure, sends his intrepid heroes Dirk Pitt and Al Giordino on their wildest, boldest mission into the ancient world, unlocking extraordinary secrets and solving hideous crimes. Another fabulous read from the most beloved series from the #1 New York Times-bestselling author. The murders of a team of United Nations scientists in El Salvador. . . A deadly collision in the waterways off the city of Detroit. . . An attack by tomb raiders on an archaeological site along the banks of the Nile. . . Is there a link between these violent events? The answer may lie in the tale of an Egyptian princess forced to flee the armies of her father three thousand years ago. During what was supposed to be a routine investigation in South America, NUMA Director Dirk Pitt finds himself embroiled in an international mystery, one that will lead him across the world and which will threaten everyone and everything he knows--most importantly, his own family. Pitt travels to Scotland in search of answers about the spread of an unknown disease and the shadowy bioremediation company that may be behind it. Meanwhile, his son and daughter face a threat of their own when the discoveries they have made in an Egyptian tomb put killers on their trail. These seemingly unrelated riddles come together in a stunning showdown on the rocky isles of Ireland, where only the Pitts can unravel the secrets of an ancient enigma that could change the very future of mankind.

Praise for Celtic Empire "The scene settings are colorful, the characters appealing or despicable as needed....One darned thing after another keeps the Pitts in peril and will keep readers turning the pages."--Kirkus Reviews "Cussler's 25th Dirk Pitt novel has a little bit of everything that helped make the character, who the Associated Press once called the 'oceanic answer to Indiana Jones, ' a household name to begin with--including lots of cutting-edge science and plenty of action."--The Real Book Spy "Celtic Empire is some of the best work between Clive and Dirk Cussler in years--proving that Dirk Pitt, one of the thriller genre's premier heroes, has plenty more adventures left in him moving forward."--Crime Reads

Clive Cussler is the author or coauthor of more than 50 previous books in five best-selling series, including Dirk Pitt, NUMA Files, Oregon Files, Isaac Bell, and Sam and Remi Fargo. His nonfiction works include Built for Adventure The Classic Automobiles of Clive Cussler and Dirk Pitt, plus The Sea Hunters and The Sea Hunters II. They describe the true adventures of the real NUMA, which, led by Cussler, searches for lost ships of historic significance. With his crew of volunteers, Cussler has discovered more than 60 ships, including the long lost Confederate ship Hunley. He lives in Arizona. Dirk Cussler, an MBA from Berkeley, worked for many years in the financial arena and now devotes himself full-time to writing. He is the coauthor with Clive Cussler of Black Wind and Treasure of Khan. For the past several years, he has been an active participant and partner in his father's NUMA expeditions and served as president of the NUMA advisory board of trustees.
If the item details above aren’t accurate or complete, we want to know about it.