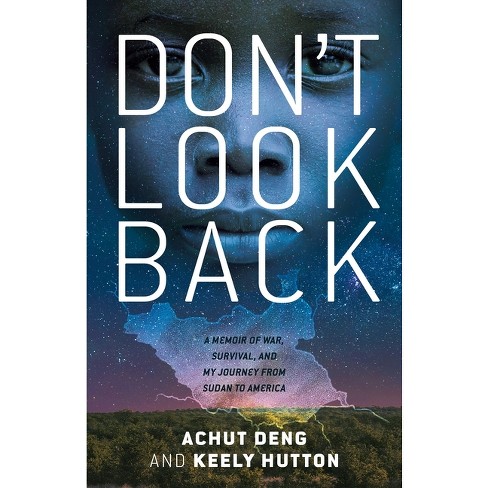 "I want life. For ten years, Achut Deng surrived at Kakuma Refugee Camp in Kenya after her family was ripped apart by the Second Sudanese Civil War. But Achut wanted to do more than merely survive. She wanted to live. The twenty-two-year civil war essentially orphaned over 20,000 children and drove them from their villages in southern Sudan. Some of these children walked over a thousand miles, through dangerous war zones and across unforgiving deserts. They are often referred to as The Lost Boys. But there were girls, too. Achut Deng was one of them. This is her story. It's a story of unimaginable hardship and selfless bravery, of tormenting physical pain and amazing emotional resilience, of unbreakable bonds of friendship and family. It's a story about what happens when your dream comes true, only to give way to a new nightmare. It's about how hard you will fight to save your own life"--

In this powerful and propulsive memoir from Achut Deng and Keely Hutton, Don't Look Back tells a harrowing and inspiring story showing both the ugliness and the beauty of humanity, and the power of not giving up.

After a deadly attack in South Sudan left six-year-old Achut Deng without a family, she lived in refugee camps for ten years, until a refugee relocation program gave her the opportunity to move to the United States. When asked why she should be given a chance to leave the camp, Achut simply told the interviewer: I want life. But the chance at starting a new life in a new country came with a different set of challenges. Some of them equally deadly. Taught by the strong women in her life not to look back, Achut kept moving forward, overcoming one obstacle after another, facing each day with hope and faith in her future. Yet, just as Achut began to think of the US as her home, a tie to her old life resurfaced, and for the first time, she had no choice but to remember her past.

Achut Deng was born in South Sudan and came to America as a refugee when she was sixteen years old. She is now an American citizen and works in human resources at a meat-packing plant in South Dakota, where she also resides. She is the mother of three sons.

Keely Hutton is a novelist, educational journalist, and former teacher. She is the recipient of the Highlights Foundation Writers Workshop scholarship at Chautauqua. She worked closely with Ugandan child soldier Ricky Richard Anywar to tell his story in her first novel, Soldier Boy. When she's not writing, Keely enjoys playing piano, reading, and planning Disney trips with her family.
If the item details above aren’t accurate or complete, we want to know about it. Report incorrect product info.