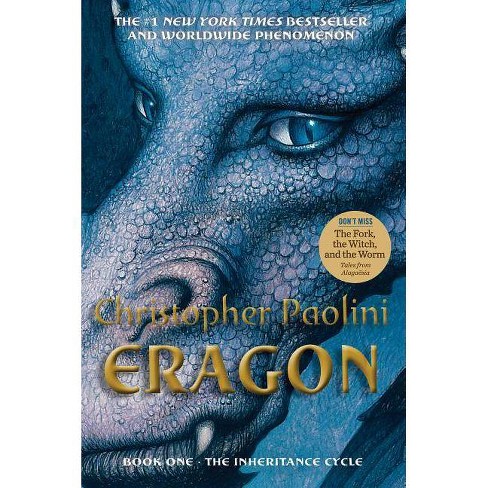 4.7 out of 5 stars with 3 reviews
33 ratings1 Question1 Question questions

Detachable poster (map) on perforated paper in back of paperback edition.

A new adventure hatches in the first book of the Inheritance Cycle, perfect for fans of Lord of the Rings! This New York Times bestselling series has sold over 35 million copies and is an international fantasy sensation. When fifteen-year-old Eragon finds a polished blue stone in the forest, he thinks it is the lucky discovery of a poor farm boy. But when the stone brings a dragon hatchling, Eragon soon realizes he has stumbled upon a legacy nearly as old as the Empire itself. Overnight his simple life is shattered, and, gifted with only an ancient sword, a loyal dragon, and sage advice from an old storyteller, Eragon is soon swept into a dangerous tapestry of magic, glory, and power. Now his choices could save--or destroy--the Empire. Features interlocking art that reveals an image across the spines of all four books! And don't miss the most recent book set in Eragon's world, The Fork, the Witch, and the Worm: Tales from Alagaësia! Christopher Paolini is a true rarity. --The Washington Post

Praise for The Inheritance Cycle: A #1 New York Times Bestseller
A #1 Publishers Weekly Bestseller
A #1 USA Today Bestseller
A Wall Street Journal Bestseller An authentic work of great talent. -New York Times Book Review Paolini is a spellbinding fantasy writer. -The Boston Globe A breathtaking and unheard of success. -USA Today "Christopher Paolini make[s] literary magic." -People "Will appeal to legions of readers who have been captivated by the Lord of the Rings trilogy." -School Library Journal Praise for Eragon: "The new 'It' book of children's lit." -U.S. News & World Report "Unusual, powerful, fresh, and fluid." -Booklist, Starred The author takes the near-archetypes of fantasy fiction and makes them fresh and enjoyable, chiefly through a crisp narrative and a likable hero. -Publisher's Weekly

Christopher Paolini's abiding love of fantasy inspired him to write the Inheritance Cycle, which quickly became an internationally bestselling series. He began the first draft of the introductory book in the series, Eragon, at age fifteen. Christopher draws inspiration for the world of Eragon and his dragon, Saphira, from the natural beauty that surrounds his home in Montana: the tumultuous weather, the roaring Yellowstone River, and the soaring Beartooth Mountains. Find out more about Christopher and the Inheritance Cycle at paolini.net.
If the item details above aren’t accurate or complete, we want to know about it. Report incorrect product info.