Get Out of Your Own Way - by Dave Hollis (Hardcover) 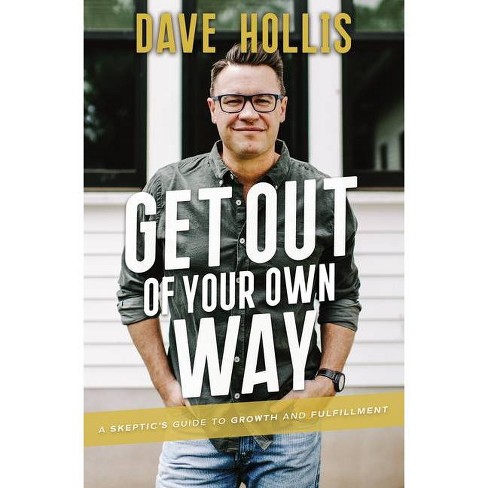 Dave Hollis, CEO of the Hollis Co. and husband of #1 New York Times bestselling author Rachel Hollis, refutes the lies people believe but don't talk about, keeping them stuck in a rut, and points the way for readers to finally start living the best versions of their lives.

When Rachel Hollis began writing the #1 New York Times bestseller Girl, Wash Your Face, her husband Dave bristled at her transparency about her self-deceptions. Then he had a revelation: women aren't the only ones who believe lies. Both women and men buy into a host of lies that keep them from reaching their potential, often against a backdrop of ingrained ideas about how they should or shouldn't act, how they should or shouldn't reach for help, or how they show up for life.

Dave knows this personally. He believed all the lies, too. He found himself stuck in a rut, unmotivated, unfulfilled, and a version of himself he didn't like, all while being skeptical he could actually do anything about it. Then, he began to wake up. In his new book, he talks honestly about topics people aren't normally honest about--his impulse to solve instead of listen, his struggle to accept help or admit he needs it, even his insecurities about being a parent. Unpacking the untruths he once believed, he reveals how those lies held him back and outlines the tools that helped him change his life. Offering encouragement, challenge, and a hundred moments to laugh at himself, Dave points the way for others to drop bogus ideas and finally start living the best versions of their lives too.

This product is featured in a Target Finds Gift List

5 out of 5 stars
Would recommend
Ang - 1 month ago
This book is straight fire! I love Dave's vulnerability and authenticity. It makes it that much harder to put it down! I have finished it, and I will go back and read it again because I don't want to miss writing down any quotes that ring with me! Thank you Dave!
Did you find this review helpful?
Report review

5 out of 5 stars
Would recommend
AKG1024 - 1 month ago
This book is absolutely amazing! It came out at the perfect time! It is raw and real and so relatable! I can’t wait to see what else he comes out with in the future!
Did you find this review helpful?
Report review

5 out of 5 stars
Would recommend
Targetforallthethings - 2 months ago, Verified purchaser
I’ve followed Rachel and Dave for some time. Love them both. For some reason, I’m more drawn to Dave’s style so I was very excited to read this book. I am not disappointed! Love it as much as Rachel’s books!
Did you find this review helpful?
Report review

Don't Let Doubt Hold You Back!

4 out of 5 stars
Would recommend
EmilyP - 2 months ago
Dave Hollis is the husband of Rachel Hollis, author and entrepreneur. He is also a businessman in his own right, having worked for Disney and several other major companies throughout the years. In his first book, "Get Out of Your Own Way," Hollis takes similar principles that his wife Rachel shared in her wildly popular book "Girl, Wash Your Face" and applying them to the male perspective. Hollis breaks down misconceptions that have led him to avoid pursuing his goals, neglecting his health and other common missteps. Every chapter has a theme, much like "Girl, Wash Your Face." I actually gleaned some good insights from this book and plan on sharing it with my husband and some friends who could use its message. Bear in mind that this book is considered self-improvement, so if you're not ready for implementing change, it's probably not for you. However, if you need a book that will spur you on to change and encourage you at the same time, "Get Out Of Your Own Way" could be a helpful read. Hollis is engaging and blunt at times, but seems to really want the best for those around him, which is an admirable trait. While I am not necessarily the target market for this book, it was a great read and worth the time to dive into. I did highlight a lot of the book and have shared some quotes that were particularly meaningful to me. This is a secular book, so expect a few curse words, but if you can overlook that, the book is well worth the read. Hollis is down to earth and affable with encouragement to spare. I was an early reader, thanks to Thomas Nelson Inc. Publishers and #NetGalley. I loved it so much I purchased a copy for my husband as a gift. Don't miss it!
1 guest found this review helpful. Did you?
Report review

5 out of 5 stars
Would recommend
ChanelQ - 2 months ago
I bought this book for my husband and of course I had to start reading some of it before I handed it over. Very, very good so far and I cant wait to hear what my husband gets out of it so then I can finish reading it.
Did you find this review helpful?
Report review

5 out of 5 stars
Would recommend
EliMm - 2 months ago
Great book! Whether you need a refresher or are getting started this was a great book.
Did you find this review helpful?
Report review

5 out of 5 stars
Would recommend
Ela00 - 2 months ago, Verified purchaser
Really good read. So real and drives the message home for those that are not naturally motivated. I love both books by Rachel Hollis and this one gives the advice from another angle. Not to compare the two obviously because Dave did an outstanding job with this book. Thanks for your great work Dave Hollis!!
Did you find this review helpful?
Report review

5 out of 5 stars
Would recommend
Manda48 - 2 months ago
Dave Hollis brings the fire! He is laying it all out there. Dave explains his trudge through the lies he was believing and what helped him get over them. If you're constantly being tripped up by something, but aren't sure what's holding you back, maybe you're in your OWN WAY! Start by examining the lies you're believing about your own life and setting yourself free of those. Only then can you properly determine a course of action to get out of your own way and reach your goals! *I received an ARC from the publisher, but that in no way influenced my review. My opinion is my own.
1 guest found this review helpful. Did you?
Report review