It - by Stephen King (Hardcover) 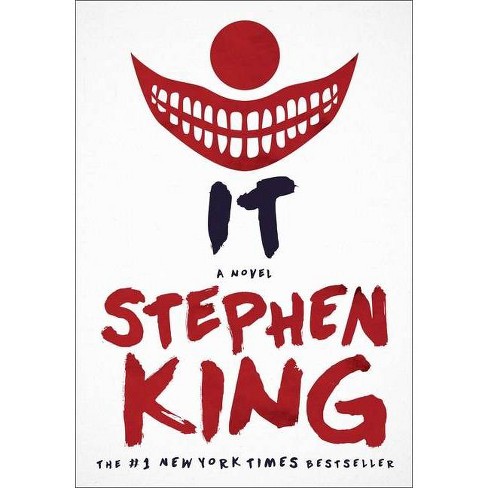 "To the children, the town was their whole world. To the adults, knowing better, Derry, Maine, was just their home town: familiar, well-ordered, a good place to live. It was the children who saw--and felt--what made Derry so horribly different. In the storm drains, in the sewers, It lurked, taking on the shape of every nightmare, each person's deepest dread. Sometimes It reached up, seizing, tearing, killing ... The adults, knowing better, knew nothing. Time passed and the children grew up, moved away. The horror of It was deep-buried, wrapped in forgetfulness. Until the grown-up chldren were called back, once more to confront It as It stirred and coiled in the sullen depths of their memories, reaching up again to make their past nightmares a terrible present reality"--Jacket.

It: Chapter Two--now a major motion picture! Stephen King's terrifying, classic #1 New York Times bestseller, "a landmark in American literature" (Chicago Sun-Times)--about seven adults who return to their hometown to confront a nightmare they had first stumbled on as teenagers...an evil without a name: It. Welcome to Derry, Maine. It's a small city, a place as hauntingly familiar as your own hometown. Only in Derry the haunting is real. They were seven teenagers when they first stumbled upon the horror. Now they are grown-up men and women who have gone out into the big world to gain success and happiness. But the promise they made twenty-eight years ago calls them reunite in the same place where, as teenagers, they battled an evil creature that preyed on the city's children. Now, children are being murdered again and their repressed memories of that terrifying summer return as they prepare to once again battle the monster lurking in Derry's sewers. Readers of Stephen King know that Derry, Maine, is a place with a deep, dark hold on the author. It reappears in many of his books, including Bag of Bones, Hearts in Atlantis, and 11/22/63. But it all starts with It. "Stephen King's most mature work" (St. Petersburg Times), "It will overwhelm you...to be read in a well-lit room only" (Los Angeles Times).

" King's most ambitious project...reads as if written in a white heat!"-- "San Jose Mercury News"

"It will overwhelm you...Characters so real you feel you are reading about yourself...scenes to be read in a well-lit room only."-- "Los Angeles Times"

"A ghoul's delight...a good old-fashioned chill and shiver fest...as creepy as the finest of that genre."-- "Kansas City Star"

"A great scary book...a nightmare roller-coaster...packed with more chills than a Frigidaire... 'It' turns out to be the monster-dread in us all, the one that refuses to go away."-- "San Francisco Chronicle"

"A mesmerizing odyssey of terror...King writes like one possessed, never cheats the reader, always gives full measure...He is brilliant...dark and sinister."-- "The Washington Post Book World"

"Chock-full of spooky stuff...a sprawling scare-fest that defines King's recurring themes and adds a new set of ambitions to the mix."-- "The Philadelphia Inquirer"

"Epic...gargantuan...breathlessly accelerating suspense... King is our great storyteller...I imagine him as a possessed figure rocking over a smoking word processor, hunting for a beat his sentences can dance to, pounding the shocks and scares like a rock organist laying down the power chords."-- "Los Angeles Herald-Examiner"

"IT exhibits the potato chip syndrome - quite simply, you can't read just one page and stop...It is in this novel that King comes out of the closet, a closet jammed and crowded with his own monsters."-- "Houston Chronicle"

"Vintage King...a magnum opus of terror...just a glance at the first few pages, and you can't put this novel aside."-- "St. Louis Post-Dispatch"

Stephen King is the author of more than sixty books, all of them worldwide bestsellers. His recent work includes Billy Summers, If It Bleeds, The Institute, Elevation, The Outsider, Sleeping Beauties (cowritten with his son Owen King), and the Bill Hodges trilogy: End of Watch, Finders Keepers, and Mr. Mercedes (an Edgar Award winner for Best Novel and a television series streaming on Peacock). His novel 11/22/63 was named a top ten book of 2011 by The New York Times Book Review and won the Los Angeles Times Book Prize for Mystery/Thriller. His epic works The Dark Tower, It, Pet Sematary, and Doctor Sleep are the basis for major motion pictures, with It now the highest-grossing horror film of all time. He is the recipient of the 2020 Audio Publishers Association Lifetime Achievement Award, the 2018 PEN America Literary Service Award, the 2014 National Medal of Arts, and the 2003 National Book Foundation Medal for Distinguished Contribution to American Letters. He lives in Bangor, Maine, with his wife, novelist Tabitha King.
If the item details above aren’t accurate or complete, we want to know about it. Report incorrect product info.