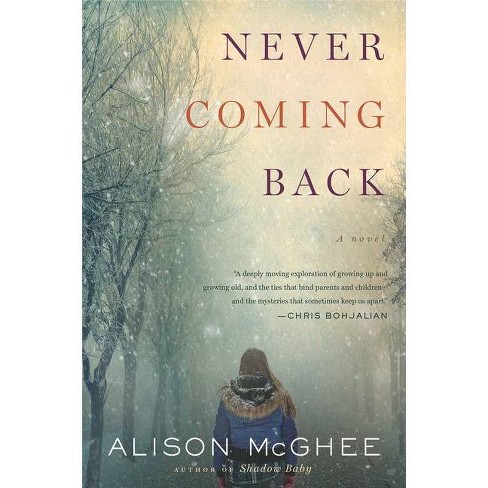 When Clara Winter left her rural Adirondack town for college, she never looked back. Her mother, Tamar, a fiercely independent but loving woman who raised Clara on her own, all but pushed her out the door, forcing Clara to build a new life for herself, far from her roots, far from her high school boyfriend, far from the life she had always known.
Now more than a decade has passed, and Clara, a successful writer, has been summoned home. Tamar has become increasingly forgetful and can no longer live on her own. But just as her mother's memory is beginning to slip away, Clara's questions are building. Why was Tamar so insistent that Clara leave home all those years ago? Just what secrets was she hiding?
In this "quietly powerful" (Booklist) and "luminous novel" (Kirkus Reviews), Alison McGhee tells the story of a young woman finding her way in life, determined to know her mother -- and by extension herself -- before it's too late.

A Midwest Indie Bestseller "This sensitive novel...offers readers an intimate and painfully aware portrait of the debilitating effects of Alzheimer's on its victims as well as the people who must watch their tormented loved ones tumble into the disease's terrible abyss...Never Coming Back, [is] a novel about profound sadness, insurmountable loss, and the possibility of allowing new people into your life."--Star Tribune "[A] quietly powerful novel....Fans of Sara Baume, Holly Chamberlin, and Francesca Segal will appreciate McGhee's magnetic prose and her ability to pack a richly detailed story into a slim novel. Atmospheric and introspective, Never ComingBack will resonate with those who have lost a parent to illness or estrangement but still have questions they'd like to be answered."--Booklist "A luminous novel....the author's gift for subtly poetic language and her believable dialogue make Clara's journey worth following. McGhee has an almost musical ability to repeat the themes of her novel with enough variation to keep them fresh. Fierce, complicated characters appear to grow out of the severe Adirondack landscape, and McGhee swerves away from sentimentality in addressing the relentlessly changing relationship at the novel's core." --Kirkus Reviews "[A] poignant meditation on the relationship between a mother and daughter....Though this well-written story will appeal to a broad range of readers for its rich characterization, mothers and daughters will especially find Clara's and Tamar's story moving and memorable."--Publishers Weekly "McGhee's own gift for words takes you to the very heart of this tense yet tender relationship. Through vivid and meandering dips into memory, McGhee draws us into Clara's rapidly shifting thoughts as she tries to piece together previous assumptions with new discoveries."--BookPage "McGhee's latest novel...not only tackles the complexities of a mother-daughter relationship and the unresolved conflicts that can have lasting effects on both women, it also informs readers about how Alzheimer's can quickly and cruelly ravage a person."--Library Journal "Never Coming Back is a deeply moving exploration of growing up and growing old, and the ties that bind parents and children - and the mysteries that sometimes keep us apart."--Chris Bohjalian, best-selling author of The Sleepwalker, Midwives, and The Sandcastle Girls "When a parent is involved, the journey of a caregiver can take the mind back through all the bumps and beauties of a complicated relationship and the heart and soul into new and challenging territory. Alison McGhee captures this--all the nuances and conflicts--in her beautifully written novel. Much to praise here but it is the remarkable characterization of the mother, the indomitable Tamar, who McGhee paints with such feeling, that lingers for me. A wise, humane book and a very special novelist."--George Hodgman, New York Times best-selling author of Bettyville "Alison McGhee returns to the landscape of the Adirondacks in this beautifully devastating novel about the things that remain unspoken between parent and child. Clara Winter's need to know what lies on the other side of her mother's Alzheimer's-induced silence drives this book toward its ferocious conclusion. Never Coming Back is an exquisite book, brimful with nostalgia, love, regret, humor, yearning--and unforgettable prose."--Julie Schumacher, author of Dear Committee Members

ALISON MCGHEE writes for all ages in all forms. Her best-selling novel Shadow Baby was a Today Show Book Club pick, and her picture book for adults, Someday, was a #1 New York Times bestseller. She has won dozens of fellowships and awards, has three grown children, and lives a semi-nomadic life.
If the item details above aren’t accurate or complete, we want to know about it. Report incorrect product info.