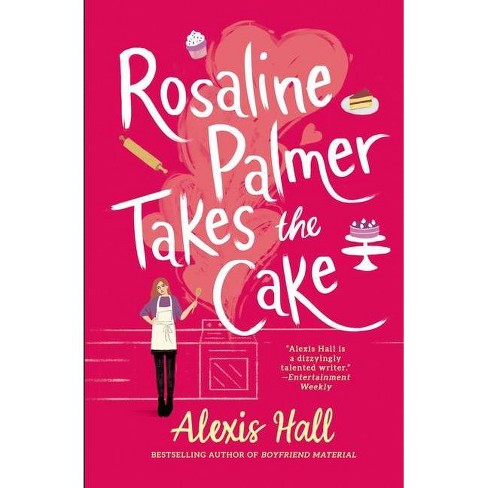 Fans of Casey McQuiston, Christina Lauren, and Abby Jimenez will love this scrumptious and sweet romantic comedy from the "dizzyingly talented writer" of Boyfriend Material (Entertainment Weekly) Publishers Weekly Summer Reads Top 10 Staff Picks
Oprah Daily Most Anticipated Romance Novels of 2021
Buzzfeed Must-Read Spring Romance Novels
Goodreads Sexy Spring Romances
LGBTQ Reads: Most Anticipated Adult LGBTQAP Fiction 2021
We Are Bookish: Spring Releases to Have on Your Radar Following the recipe is the key to a successful bake. Rosaline Palmer has always lived by those rules--well, except for when she dropped out of college to raise her daughter, Amelie. Now, with a paycheck as useful as greaseproof paper and a house crumbling faster than biscuits in tea, she's teetering on the edge of financial disaster. But where there's a whisk there's a way . . . and Rosaline has just landed a spot on the nation's most beloved baking show. Winning the prize money would give her daughter the life she deserves--and Rosaline is determined to stick to the instructions. However, more than collapsing trifles stand between Rosaline and sweet, sweet victory. Suave, well-educated, and parent-approved Alain Pope knows all the right moves to sweep her off her feet, but it's shy electrician Harry Dobson who makes Rosaline question her long-held beliefs--about herself, her family, and her desires. Rosaline fears falling for Harry is a guaranteed recipe for disaster. Yet as the competition--and the ovens--heat up, Rosaline starts to realize the most delicious bakes come from the heart.

"[A] romance perfect for fans of The Great British Bake Off!"--Book Riot

"[Hall] crafts some of the most sparkling prose in contemporary romance. . . . we give this fully baked concept our highest compliments."--Entertainment Weekly

"A romance that's made for fans of the UK's Great British Bakeoff."--Oprah Daily

"Hall seamlessly combines humor, romance, and drama to create a story that is intimately believable and at once cozy and sexy. . . . The book combines sweet escapism and poignant cultural touchstones with well-crafted characters and hilariously familiar settings. Hall does it again with this culturally relevant, wonderfully escapist foray into the baking world. This is a must-buy for any library."--Library Journal

"Hall's creation is a joy--a deeply emotional and ultimately rewarding story about a woman finding her true path and true love, surrounded by delicious baked goods on a BBC soundstage."--Bookpage

"With loads of wit and baking-related banter . . . perfect for fans of the Great British Bake Off and Hall's trademark humour."--The Nerd Daily

"In this delicious romantic comedy . . . Hall creates a memorable cast of characters, from Rosaline's supportive ex-girlfriend to the utterly adorable and scene-stealing Amelie. Setting the book at a reality TV show is a brilliant choice . . . there's sparkling humor and plenty of baking mishaps. A perfect bake."--Kirkus

Alexis Hall lives in a little house in the south east of England where he writes books about people who bake far better than he does. He can, however, whip up a passable brownie if pressed.
If the item details above aren’t accurate or complete, we want to know about it.

Something Fabulous - by Alexis Hall (Paperback)

A Lady for a Duke - by Alexis Hall (Paperback)

Something Spectacular - (Something Fabulous) by Alexis Hall (Paperback)