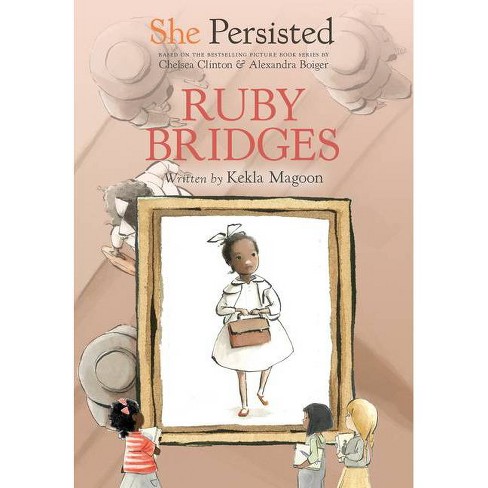 Help us improve this page

Inspired by the #1 New York Times bestseller She Persisted by Chelsea Clinton and Alexandra Boiger comes a chapter book series about women who stood up, spoke up and rose up against the odds! As a first grader, Ruby Bridges was the first Black student to integrate William Frantz Elementary School in New Orleans, Louisiana. This was no easy task, especially for a six-year-old. Ruby's bravery and perseverance inspired children and adults alike to fight for equality and social justice. In this chapter book biography by award-winning author Kekla Magoon, readers learn about the amazing life of Ruby Bridges--and how she persisted. Complete with an introduction from Chelsea Clinton!

Kekla Magoon (keklamagoon.com) writes novels and nonfiction for young readers, including The Highest Tribute: Thurgood Marshall's Life, Leadership, and Legacy, Today the World Is Watching You: The Little Rock Nine and the Fight for School Integration 1957-58, The Season of Styx Malone, and The Rock and the River. She has received the Boston Globe-Horn Book Award, an NAACP Image Award, the John Steptoe New Talent Award, three Coretta Scott King Honors, and been long listed for the National Book Award. Kekla conducts school and library visits nationwide. She holds a B.A. from Northwestern University and an M.F.A. in Writing from Vermont College of Fine Arts, where she now serves on faculty. You can follow Kekla Magoon on Twitter @keklamagoon.

Get it by Tue, Aug 3 with Express Shipping
Get it by from Wed, Aug 4 - Mon, Aug 9 with free Standard Shipping