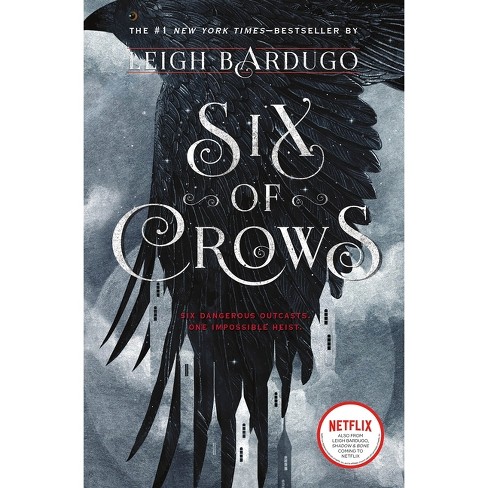 "Six dangerous outcasts. One impossible heist. Kaz's crew is the only thing that might stand between the world and destruction--if they don't kill each other first"--

The Grishaverse will be coming to Netflix soon with Shadow and Bone, an original series!

Enter the Grishaverse with the #1 New York Times-bestselling Six of Crows, Book One of the Six of Crows Duology.

Ketterdam: a bustling hub of international trade where anything can be had for the right price--and no one knows that better than criminal prodigy Kaz Brekker. Kaz is offered a chance at a deadly heist that could make him rich beyond his wildest dreams. But he can't pull it off alone. . . . A convict with a thirst for revenge. A sharpshooter who can't walk away from a wager. A runaway with a privileged past. A spy known as the Wraith. A Heartrender using her magic to survive the slums. A thief with a gift for unlikely escapes. Six dangerous outcasts. One impossible heist. Kaz's crew is the only thing that might stand between the world and destruction--if they don't kill each other first. Six of Crows by Leigh Bardugo returns to the breathtaking world of the Grishaverse in this unforgettable tale about the opportunity--and the adventure--of a lifetime. Praise for Six of Crows: "Six of Crows is a twisty and elegantly crafted masterpiece that thrilled me from the beginning to end." -New York Times-bestselling author Holly Black "Six of Crows [is] one of those all-too-rare, unputdownable books that keeps your eyes glued to the page and your brain scrambling to figure out what's going to happen next." -Michael Dante DiMartino, co-creator of Avatar: The Last Airbender and The Legend of Korra "There's conflict between morality and amorality and an appetite for sometimes grimace-inducing violence that recalls the Game of Thrones series. But for every bloody exchange there are pages of crackling dialogue and sumptuous description. Bardugo dives deep into this world, with full color and sound. If you're not careful, it'll steal all your time." --The New York Times Book Review Read all the books in the Grishaverse! The Shadow and Bone Trilogy
(previously published as The Grisha Trilogy)
Shadow and Bone
Siege and Storm
Ruin and Rising The Six of Crows Duology
Six of Crows
Crooked Kingdom The King of Scars Duology
King of Scars The Language of Thorns: Midnight Tales and Dangerous Magic
The Severed Moon: A Year-Long Journal of Magic Praise for the Grishaverse "A master of fantasy." --The Huffington Post
"Utterly, extremely bewitching." --The Guardian
"The best magic universe since Harry Potter." --Bustle
"This is what fantasy is for." --The New York Times Book Review
"[A] world that feels real enough to have its own passport stamp." --NPR
"The darker it gets for the good guys, the better." --Entertainment Weekly
"Sultry, sweeping and picturesque. . . . Impossible to put down." --USA Today
"There's a level of emotional and historical sophistication within Bardugo's original epic fantasy that sets it apart." --Vanity Fair
"Unlike anything I've ever read." --Veronica Roth, bestselling author of Divergent
"Bardugo crafts a first-rate adventure, a poignant romance, and an intriguing mystery!" --Rick Riordan, bestselling author of the Percy Jackson series

"This has all the right elements to keep readers enthralled: a cunning leader with a plan for every occasion, nigh-impossible odds, an entertainingly combative team of skilled misfits, a twisty plot, and a nerve-wracking cliffhanger." --Publishers Weekly, starred review (on Six of Crows)

"Cracking page-turner with a multi ethnic band of misfits with differing sexual orientations who satisfyingly, believably jell into a family." --Kirkus Reviews, starred review (on Six of Crows) "Set in a world that will be familiar to fans of the author, this book can be fully enjoyed without having read any previous title. . . . This is an easy choice for teens who enjoyed The Grisha Trilogy, Diviners, or any of the Shadowhunter books." --VOYA, starred review (on Six of Crows) "an exciting beginning to a new sequence from a fantasy author swiftly becoming a talent to watch." --The Horn Book (Six of Crows) "Unlike anything I've ever read." --Veronica Roth (on Shadow and Bone) "A heady blend of fantasy, romance, and adventure." --Rick Riordan (on Siege and Storm) "Triumphant." --Kirkus Reviews, starred review (Ruin and Rising) "Mesmerizing. . . . Bardugo's set up is shiver-inducing, of the delicious variety. This is what fantasy is for." --The New York Times Book Review (on Shadow and Bone) "This is one book series you want to get hooked on." --Seventeen.com "These books are the greatest things since Harry Potter AND sliced bread." --hellogiggles.com "Rich, satisfying, and gorgeous, laced with heart-pounding action and pitch-perfect romance." --Cinda Williams Chima, bestselling author (on Shadow and Bone) "Completely engrossing." --Romantic Times (on Siege and Storm) "Fast-paced and unpredictable. . . . A unique world complete with monsters, magic, danger, romance, corruption, and extravagance." --School Library Journal, starred review (Shadow and Bone) "Filled with lush descriptions, intriguing magic, and plenty of twists, this memorable adventure offers action and intrigue mixed with an undercurrent of romance and danger." --Publishers Weekly (Shadow and Bone) "Bardugo weaves a captivating spell with lushly descriptive writing, engaging characters, and an exotic, vivid world. Readers will wait impatiently for the next installment." --Booklist (Shadow and Bone) "Readers will be rooting for this lonely, tough heroine as she navigates perils physical, magical, and emotional." --Bulletin of the Center for Children's Books (Shadow and Bone) "A rich fantasy landscape, an inspired magical structure, and a gratifying emotional hook keep the pages whirring." --The Horn Book (Shadow and Bone) "Scheming and action carry readers at a breathless pace . . . and will definitely leave them panting for the series' conclusion." --Kirkus Reviews (Siege and Storm) "Richly crafted . . . An engaging wish-fulfillment fantasy." --The Horn Book (Siege and Storm) "[Readers will be] tapping their feet impatiently for the concluding volume." --Booklist (Siege and Storm) "Readers won't be able to turn the pages fast enough." --Booklist (Ruin and Rising) "Bardugo is a master at building an action-packed fantasy with extraordinary world-building and complete characters." --School Library Journal (Ruin and Rising)

Leigh Bardugo is the New York Times-bestselling author of Ninth House and the creator of the Grishaverse (coming soon to Netflix) which spans the Shadow and Bone trilogy, the Six of Crows duology, the King of Scars duology, The Language of Thorns, and The Lives of Saints-- with more to come. Her short stories can be found in multiple anthologies, including Best American Science Fiction & Fantasy. Leigh grew up in Southern California and graduated from Yale University. These days she lives and writes in Los Angeles.
If the item details above aren’t accurate or complete, we want to know about it. Report incorrect product info.