The Dark Tower I, 1 - by Stephen King 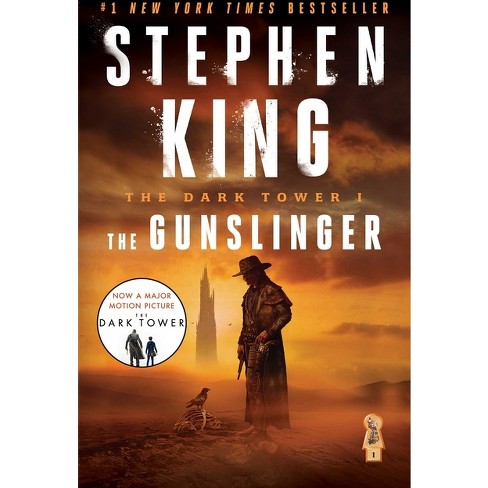 "Soon to be a major motion picture"--Cover.

"An impressive work of mythic magnitude that may turn out to be Stephen King's greatest literary achievement" (The Atlanta Journal-Constitution), The Gunslinger is the first volume in the epic Dark Tower Series. A #1 national bestseller, The Gunslinger introduces readers to one of Stephen King's most powerful creations, Roland of Gilead: The Last Gunslinger. He is a haunting figure, a loner on a spellbinding journey into good and evil. In his desolate world, which mirrors our own in frightening ways, Roland tracks The Man in Black, encounters an enticing woman named Alice, and begins a friendship with the boy from New York named Jake. Inspired in part by the Robert Browning narrative poem, "Childe Roland to the Dark Tower Came," The Gunslinger is "a compelling whirlpool of a story that draws one irretrievable to its center" (Milwaukee Sentinel). It is "brilliant and fresh...and will leave you panting for more" (Booklist).

"A compelling whirlpool of a story that draws one irretrievably to its center."-- "Milwaukee Sentinel"

"An impressive work of mythic magnitude. May turn out to be Stephen King's greatest literary achievement."-- "Atlanta Journal-Constitution"

"Brilliant, fresh and compelling...will leave you panting for more."-- "Booklist"

Stephen King is the author of more than sixty books, all of them worldwide bestsellers. His recent work includes Fairy Tale, Billy Summers, If It Bleeds, The Institute, Elevation, The Outsider, Sleeping Beauties (cowritten with his son Owen King), and the Bill Hodges trilogy: End of Watch, Finders Keepers, and Mr. Mercedes (an Edgar Award winner for Best Novel and a television series streaming on Peacock). His novel 11/22/63 was named a top ten book of 2011 by The New York Times Book Review and won the Los Angeles Times Book Prize for Mystery/Thriller. His epic works The Dark Tower, It, Pet Sematary, Doctor Sleep, and Firestarter are the basis for major motion pictures, with It now the highest-grossing horror film of all time. He is the recipient of the 2020 Audio Publishers Association Lifetime Achievement Award, the 2018 PEN America Literary Service Award, the 2014 National Medal of Arts, and the 2003 National Book Foundation Medal for Distinguished Contribution to American Letters. He lives in Bangor, Maine, with his wife, novelist Tabitha King.
If the item details above aren’t accurate or complete, we want to know about it.

The Dark Tower I - by Stephen King (Hardcover)

The Wind Through the Keyhole - (Dark Tower) by Stephen King (Paperback)