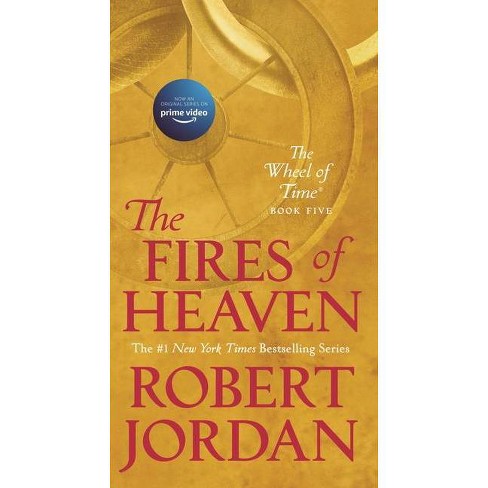 The Last Battle is approaching rapidly, for the seals of the Dark One's prison are beginning to crumble. The Dragon Reborn is closer to ruling the world, while the Forsaken Rahvin is meeting with three of his fellows to ensure their ultimate victory over the Dragon.

In The Fires of Heaven, the fifth novel in Robert Jordan's #1 New York Times bestselling epic fantasy series, The Wheel of Time(R), four of the most powerful Forsaken band together against the Champion of Light, Rand al'Thor. Prophesized to defeat the Dark One, Rand al'Thor, the Dragon Reborn, has upset the balance of power across the land. Shaido Aiel are on the march, ravaging everything in their path. The White Tower's Amyrlin has been deposed, turning the Aes Sedai against one another. The forbidden city of Rhuidean is overrun by Shadowspawn. Despite the chaos swirling around him, Rand continues to learn how to harness his abilities, determined to wield the One Power--and ignoring the counsel of Moiraine Damodred at great cost. Since its debut in 1990, The Wheel of Time(R) by Robert Jordan has captivated millions of readers around the globe with its scope, originality, and compelling characters. The last six books in series were all instant #1 New York Times bestsellers, and The Eye of the World was named one of America's best-loved novels by PBS's The Great American Read. The Wheel of Time(R)
New Spring: The Novel
#1 The Eye of the World
#2 The Great Hunt
#3 The Dragon Reborn
#4 The Shadow Rising
#5 The Fires of Heaven
#6 Lord of Chaos
#7 A Crown of Swords
#8 The Path of Daggers
#9 Winter's Heart
#10 Crossroads of Twilight
#11 Knife of Dreams By Robert Jordan and Brandon Sanderson
#12 The Gathering Storm
#13 Towers of Midnight
#14 A Memory of Light By Robert Jordan and Teresa Patterson
The World of Robert Jordan's The Wheel of Time By Robert Jordan, Harriet McDougal, Alan Romanczuk, and Maria Simons
The Wheel of Time Companion By Robert Jordan and Amy Romanczuk
Patterns of the Wheel: Coloring Art Based on Robert Jordan's The Wheel of Time

The Fires of Heaven - (Wheel of Time) by Robert Jordan (Hardcover)