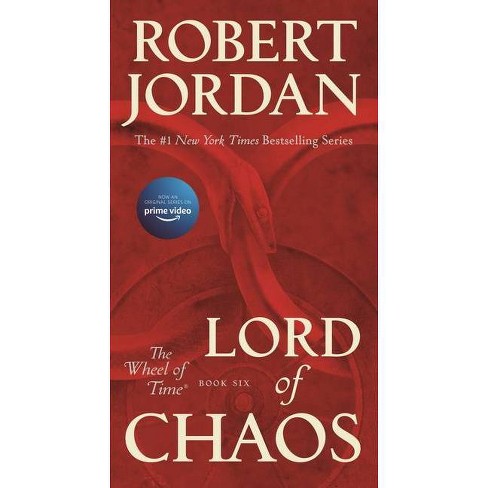 In Lord of Chaos, the sixth novel in Robert Jordan's #1 New York Times bestselling epic fantasy series, The Wheel of Time(R), Rand al'Thor, the Dragon Reborn, builds his army of Light even as sworn enemies--and supposed allies--move against him. Now ruling Tear, Andor, and Caemlyn, among other nations, Rand is recruiting all men capable of channeling to be trained as his Asha'man soldiers. The warrior Aiel clans have pledged loyalty to Rand, acknowledging him as their chief of chiefs, even though the Shaido Aiel remain a threat. Split into two factions, the Aes Sedai of the White Tower and their rebel counterparts both seek to ally themselves with the Dragon Reborn. Rand knows all too well the manipulative nature of the Aes Sedai, no matter which side of their internal war they stand upon. But even he cannot predict just how desperate, cruel, and treacherous they can be. And in the shadows, the Forsaken and the Dark One are conjuring even more chaos... Since its debut in 1990, The Wheel of Time(R) by Robert Jordan has captivated millions of readers around the globe with its scope, originality, and compelling characters. The last six books in series were all instant #1 New York Times bestsellers, and The Eye of the World was named one of America's best-loved novels by PBS's The Great American Read. The Wheel of Time(R)
New Spring: The Novel
#1 The Eye of the World
#2 The Great Hunt
#3 The Dragon Reborn
#4 The Shadow Rising
#5 The Fires of Heaven
#6 Lord of Chaos
#7 A Crown of Swords
#8 The Path of Daggers
#9 Winter's Heart
#10 Crossroads of Twilight
#11 Knife of Dreams By Robert Jordan and Brandon Sanderson
#12 The Gathering Storm
#13 Towers of Midnight
#14 A Memory of Light By Robert Jordan and Teresa Patterson
The World of Robert Jordan's The Wheel of Time By Robert Jordan, Harriet McDougal, Alan Romanczuk, and Maria Simons
The Wheel of Time Companion By Robert Jordan and Amy Romanczuk
Patterns of the Wheel: Coloring Art Based on Robert Jordan's The Wheel of Time

Lord of Chaos - (Wheel of Time) by Robert Jordan (Hardcover)

I Am The Lord that Healeth Thee! - by Kisha Jordan (Paperback)

12 Rules for Life : An Antidote to Chaos - by Jordan B. Peterson (Hardcover)