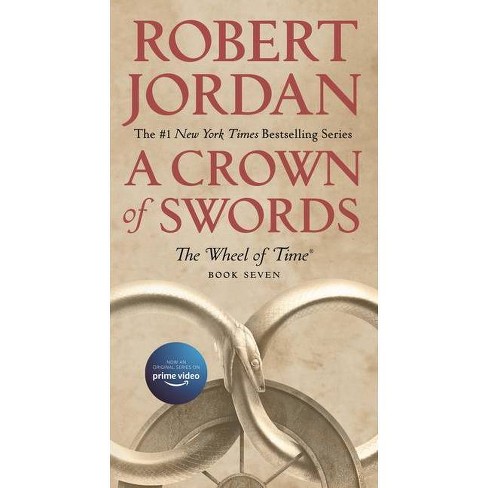 Includes a preview of A path of daggers.

In A Crown of Swords, the seventh novel in Robert Jordan's #1 New York Times bestselling epic fantasy series, The Wheel of Time(R), a rebellious uprising threatens Rand al'Thor's rule as he prepares to battle an even more dangerous enemy. Incited by nobles seeking to reclaim their places of power, armies march against the Dragon Reborn. As Rand tries to restore order, he discovers a lack of loyalty even among the warrior Aiel, and still mistrusts the rebel Aes Sedai even though they swore allegiance. But nothing can stop Rand and his Asha'man soldiers from storming the city of Illian to confront the Forsaken Sammael, and challenge him to a duel of the One Power with the winner taking the Crown of Swords... Since its debut in 1990, The Wheel of Time(R) by Robert Jordan has captivated millions of readers around the globe with its scope, originality, and compelling characters. The last six books in series were all instant #1 New York Times bestsellers, and The Eye of the World was named one of America's best-loved novels by PBS's The Great American Read. The Wheel of Time(R)
New Spring: The Novel
#1 The Eye of the World
#2 The Great Hunt
#3 The Dragon Reborn
#4 The Shadow Rising
#5 The Fires of Heaven
#6 Lord of Chaos
#7 A Crown of Swords
#8 The Path of Daggers
#9 Winter's Heart
#10 Crossroads of Twilight
#11 Knife of Dreams By Robert Jordan and Brandon Sanderson
#12 The Gathering Storm
#13 Towers of Midnight
#14 A Memory of Light By Robert Jordan and Teresa Patterson
The World of Robert Jordan's The Wheel of Time By Robert Jordan, Harriet McDougal, Alan Romanczuk, and Maria Simons
The Wheel of Time Companion By Robert Jordan and Amy Romanczuk
Patterns of the Wheel: Coloring Art Based on Robert Jordan's The Wheel of Time

"His huge, ambitious Wheel of Time series helped redefine the genre." --George R. R. Martin, author of A Game of Thrones "Anyone who's writing epic or secondary world fantasy knows Robert Jordan isn't just a part of the landscape, he's a monolith within the landscape." --Patrick Rothfuss, author of the Kingkiller Chronicle series "The Eye of the World was a turning point in my life. I read, I enjoyed. (Then continued on to write my larger fantasy novels.)" --Robin Hobb, author of the award-winning Realm of the Elderlings series "Robert Jordan's work has been a formative influence and an inspiration for a generation of fantasy writers." --Brent Weeks, New York Times bestselling author of The Way of Shadows "Jordan's writing is so amazing! The characterization, the attention to detail!" --Clint McElroy, co-creator of the #1 podcast The Adventure Zone "[Robert Jordan's] impact on the place of fantasy in the culture is colossal... He brought innumerable readers to fantasy. He became the New York Times bestseller list face of fantasy." --Guy Gavriel Kay, author of A Brightness Long Ago "Robert Jordan was a giant of fiction whose words helped a whole generation of fantasy writers, including myself, find our true voices. I thanked him then, but I didn't thank him enough." --Peter V. Brett, internationally bestselling author of The Demon Cycle series "I don't know anybody who's been as formative in crafting me as a writer as [Robert Jordan], and for that I will be forever grateful." --Tochi Onyebuchi, author of Riot Baby and War Girls "I've mostly never been involved in any particular fandom, the one exception of course was The Wheel of Time." --Marie Brennan, author of the Memoirs of Lady Trent series "I owe Robert Jordan so much. Without him, modern fantasy would be bereft of the expansive, deep worlds and the giant casts which I love so dearly. It's not often I can look at another author and say: that person paved my way. But such is exactly the case with Jordan." --Jenn Lyons, author of The Ruin of Kings "You can't talk about epic fantasy without acknowledging the titanic influence Robert Jordan has had on the genre." --Jason Denzel, author of Mystic and founder of Dragonmount.com "Jordan has come to dominate the world Tolkien began to reveal." --The New York Times "The Wheel of Time [is] rapidly becoming the definitive American fantasy saga. It is a fantasy tale seldom equaled and still less often surpassed in English." --Chicago Sun-Times "Hard to put down for even a moment. A fittingly epic conclusion to a fantasy series that many consider one of the best of all time." --San Francisco Book Review "The most ambitious American fantasy saga [may] also be the finest. Rich in detail and his plot is rich in incident. Impressive work, and highly recommended." --Booklist "Recalls the work of Tolkien." --Publishers Weekly "This richly detailed fantasy presents fully realized, complex adventure. Recommended." --Library Journal "Jordan has come to dominate the world that Tolkien began to reveal." --The New York Times "Jordan is able to take ... familiar elements and make them his own, in a powerful novel of wide and complex scope. Open religious and political conflicts add a gritty realism, while the cities and courts provide plenty of drama and splendor. Women have a stronger role than in Tolkien.... Each character in this large cast remains distinct.... Their adventures are varied, and exciting.... The Eye of the World stands alone as a fantasy epic." --Locus "Robert Jordan has created a fantasy world as tangible and credible as history. He has a fine eye for detail and a vivid sense of drama." --Morgan Llewelyn "Robert Jordan's The Eye of the World proves that there's still plenty of life in the ancient tradition of epic fantasy. Jordan has a powerful vision of good and evil-- but what strikes me as most pleasurable about The Eye of the World is all the fascinating people moving through a rich and interesting world." --Orson Scott Card "Jordan's world is rich in detail and his plot is rich in incident. Impressive work, and highly recommended." --ALA Booklist Praise for A Crown of Swords "The seventh volume of Jordan's bestselling high fantasy series carries on the ... colossal, dauntingly complex storytelling established by the previous entries ... Fans of the series will gobble down this generous addition." --Publishers Weekly (starred review) "In the long-awaited sequel to the bestselling Lord of Chaos, Jordan returns to the [same] complex, detailed fantasy world ... Highly recommended ..." --Library Journal "In the seventh volume of Jordan's preeminent high fantasy saga, intrigue and counter-intrigue continue to roil ... This latest installment of a major fantasy epic definitely will not disappoint its fans." --Booklist

The Hobbit, Or, There and Back Again - (Lord of the Rings) by J R R Tolkien (Paperback)

Crown of Oblivion - by Julie Eshbaugh