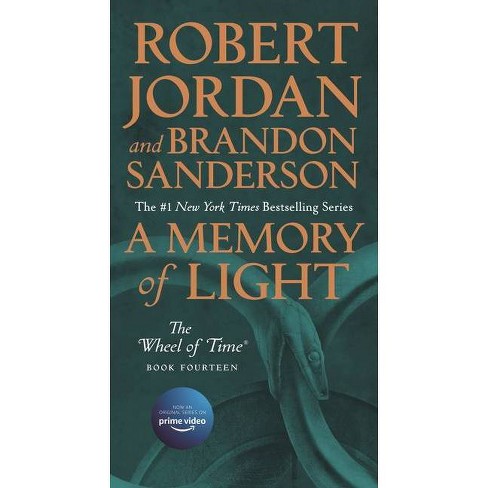 With Robert Jordan's untimely passing in 2007, Brandon Sanderson, the New York Times bestselling author of the Mistborn novels and the Stormlight Archive, was chosen by Jordan's editor--his wife, Harriet McDougal--to complete the final volume in The Wheel of Time(R), later expanded to three books. In A Memory of Light, the fourteenth and concluding novel in Jordan's #1 New York Times bestselling epic fantasy series, the armies of Light gather to fight in Tarmon Gai'don, the Last Battle, to save the Westland nations from the shadow forces of the Dark One. Rand al'Thor, the Dragon Reborn, is ready to fulfill his destiny. To defeat the enemy that threatens them all, he must convince his reluctant allies that his plan--as foolhardy and dangerous as it appears--is their only chance to stop the Dark One's ascension and secure a lasting peace. But if Rand's course of action fails, the world will be engulfed in shadow. Across the land, Mat, Perrin, and Egwene engage in battle with Shadowspawn, Trollocs, Darkfriends, and other creatures of the Blight. Sacrifices are made, lives are lost, but victory is unassured. For when Rand confronts the Dark One in Shayol Ghul, he is bombarded with conflicting visions of the future that reveal there is more at stake for humanity than winning the war. Since its debut in 1990, The Wheel of Time(R) by Robert Jordan has captivated millions of readers around the globe with its scope, originality, and compelling characters. The last six books in series were all instant #1 New York Times bestsellers, and The Eye of the World was named one of America's best-loved novels by PBS's The Great American Read. The Wheel of Time(R)
New Spring: The Novel
#1 The Eye of the World
#2 The Great Hunt
#3 The Dragon Reborn
#4 The Shadow Rising
#5 The Fires of Heaven
#6 Lord of Chaos
#7 A Crown of Swords
#8 The Path of Daggers
#9 Winter's Heart
#10 Crossroads of Twilight
#11 Knife of Dreams By Robert Jordan and Brandon Sanderson
#12 The Gathering Storm
#13 Towers of Midnight
#14 A Memory of Light By Robert Jordan and Teresa Patterson
The World of Robert Jordan's The Wheel of Time By Robert Jordan, Harriet McDougal, Alan Romanczuk, and Maria Simons
The Wheel of Time Companion By Robert Jordan and Amy Romanczuk
Patterns of the Wheel: Coloring Art Based on Robert Jordan's The Wheel of Time