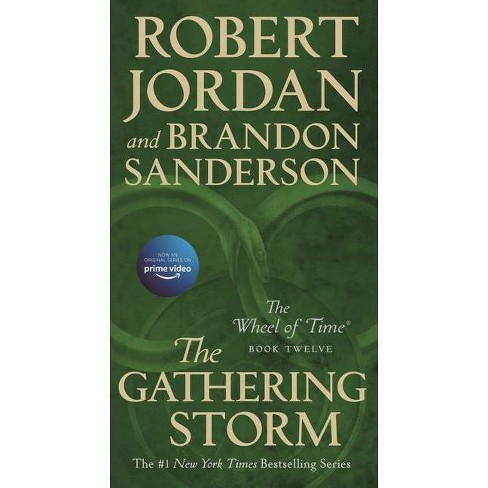 "The Wheel of Time turns and Ages come and go, leaving memories that become legend. Legend fades to myth, and even myth is long forgotten when the Age that gave it birth returns again. In the Third Age, an Age of Prophecy, the World and Time themselves hang in the balance. What was, what will be, and what is, may yet fall under the Shadow. Tarmon Gai'don, the Last Battle, looms. And mankind is not ready. The final volume of the Wheel of Time, A Memory of Light, was partially written by Robert Jordan before his untimely passing in 2007. Brandon Sanderson, New York Times bestselling author of the Mistborn books, and now Stormlight Archive, among others, was chosen by Jordan's editor--his wife, Harriet McDougal--to complete the final volume, later expanded to three books. In this epic novel, Robert Jordan's international bestselling series begins its dramatic conclusion. Rand al'Thor, the Dragon Reborn, struggles to unite a fractured network of kingdoms and alliances in preparation for the Last Battle. As he attempts to halt the Seanchan encroachment northward--wishing he could form at least a temporary truce with the invaders--his allies watch in terror the shadow that seems to be growing within the heart of the Dragon Reborn himself. Egwene al'Vere, the Amyrlin Seat of the rebel Aes Sedai, is a captive of the White Tower and subject to the whims of their tyrannical leader. As days tick toward the Seanchan attack she knows is imminent, Egwene works to hold together the disparate factions of Aes Sedai while providing leadership in the face of increasing uncertainty and despair. Her fight will prove the mettle of the Aes Sedai, and her conflict will decide the future of the White Tower--and possibly the world itself."--Provided by publisher.

With Robert Jordan's untimely passing in 2007, Brandon Sanderson, the New York Times bestselling author of the Mistborn novels and the Stormlight Archive, was chosen by Jordan's editor--his wife, Harriet McDougal--to complete the final volume in The Wheel of Time(R), later expanded to three books. The Gathering Storm, the twelfth novel in Jordan's #1 New York Times bestselling epic fantasy series, begins the story's dramatic conclusion as Rand al'Thor, the Dragon Reborn, struggles to unite a fractured network of kingdoms and alliances in preparation for the Last Battle. War is coming. The Dark One's forces are brutal and unrelenting. Rand must forge a united front, but the Seanchan remain an immediate threat, as do the Forsaken. With so many shadows swirling around him, Rand is consumed by his responsibilities, turning heartless in the eyes of his allies, and even more merciless to his enemies. Meanwhile the Seanchan march on the White Tower, where Egwene al'Vere works to rally the disparate factions of the Aes Sedai together, even as their tyrannical leader schemes against her. Providing leadership in the face of increasing uncertainty and despair, Egwene's fight will prove the mettle of the Aes Sedai, and her conflict will decide the future of the White Tower--and possibly the world itself. Since its debut in 1990, The Wheel of Time(R) by Robert Jordan has captivated millions of readers around the globe with its scope, originality, and compelling characters. The last six books in series were all instant #1 New York Times bestsellers, and The Eye of the World was named one of America's best-loved novels by PBS's The Great American Read. The Wheel of Time(R)
New Spring: The Novel
#1 The Eye of the World
#2 The Great Hunt
#3 The Dragon Reborn
#4 The Shadow Rising
#5 The Fires of Heaven
#6 Lord of Chaos
#7 A Crown of Swords
#8 The Path of Daggers
#9 Winter's Heart
#10 Crossroads of Twilight
#11 Knife of Dreams By Robert Jordan and Brandon Sanderson
#12 The Gathering Storm
#13 Towers of Midnight
#14 A Memory of Light By Robert Jordan and Teresa Patterson
The World of Robert Jordan's The Wheel of Time By Robert Jordan, Harriet McDougal, Alan Romanczuk, and Maria Simons
The Wheel of Time Companion By Robert Jordan and Amy Romanczuk
Patterns of the Wheel: Coloring Art Based on Robert Jordan's The Wheel of Time

"The battle scenes have the breathless urgency of firsthand experience, and the . . . evil laced into the forces of good, the dangers latent in any promised salvation, the sense of the unavoidable onslaught of unpredictable events bear the marks of American national experience during the last three decades." --The New York Times on The Wheel of Time

"The Wheel of Time . . . is a fantasy tale seldom equaled and still less often surpassed in English." --Chicago Sun-Times "Jordan has a powerful vision of good and evil--but what strikes me as most pleasurable . . . is all the fascinating people moving through a rich and interesting world." --Orson Scott Card on The Wheel of Time