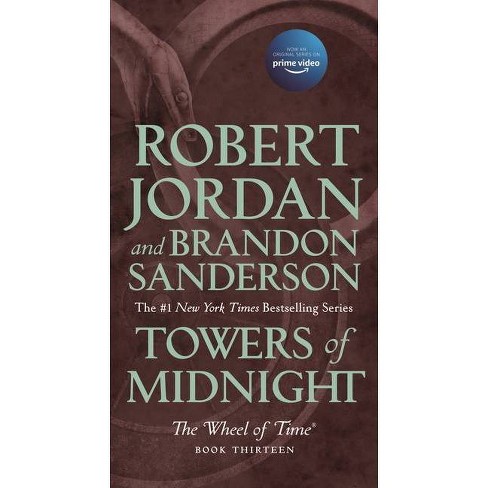 With Robert Jordan's untimely passing in 2007, Brandon Sanderson, the New York Times bestselling author of the Mistborn novels and the Stormlight Archive, was chosen by Jordan's editor--his wife, Harriet McDougal--to complete the final volume in The Wheel of Time(R), later expanded to three books. In Towers of Midnight, the thirteenth novel in Jordan's #1 New York Times bestselling epic fantasy series, the Last Battle has truly begun. The seals on the Dark One's prison are crumbling. The Pattern itself is unraveling, and the armies of the Shadow have begun to boil out of the Blight. The sun has begun to set upon the Third Age. And trials by fire await those fighting against the darkness that encroaches from their enemies--and within themselves... Perrin Aybara is now hunted by specters from his past: Whitecloaks, a slayer of wolves, and the responsibilities of leadership. All the while, an unseen foe is slowly pulling a noose tight around his neck. To prevail, he must seek answers in Tel'aran'rhiod and find a way--at long last--to master the wolf within him or lose himself to it forever. Mat Cauthon must once again face the creatures beyond the stone gateways, the Aelfinn and the Eelfinn. He had hoped that his last confrontation with them would be the end of it, but the Wheel weaves as the Wheel wills. The Tower of Ghenjei awaits, and its secrets will reveal the fate of a friend long lost. Rand al'Thor, the Dragon Reborn, arrives at the White Tower with a startling revelation for Egwene al'Vere. Fearful for his sanity, Egwene summons the rulers of the Borderlands to stand against him--knowing the fate of the world rests in their hands. Since its debut in 1990, The Wheel of Time(R) by Robert Jordan has captivated millions of readers around the globe with its scope, originality, and compelling characters. The last six books in series were all instant #1 New York Times bestsellers, and The Eye of the World was named one of America's best-loved novels by PBS's The Great American Read. The Wheel of Time(R)
New Spring: The Novel
#1 The Eye of the World
#2 The Great Hunt
#3 The Dragon Reborn
#4 The Shadow Rising
#5 The Fires of Heaven
#6 Lord of Chaos
#7 A Crown of Swords
#8 The Path of Daggers
#9 Winter's Heart
#10 Crossroads of Twilight
#11 Knife of Dreams By Robert Jordan and Brandon Sanderson
#12 The Gathering Storm
#13 Towers of Midnight
#14 A Memory of Light By Robert Jordan and Teresa Patterson
The World of Robert Jordan's The Wheel of Time By Robert Jordan, Harriet McDougal, Alan Romanczuk, and Maria Simons
The Wheel of Time Companion By Robert Jordan and Amy Romanczuk
Patterns of the Wheel: Coloring Art Based on Robert Jordan's The Wheel of Time