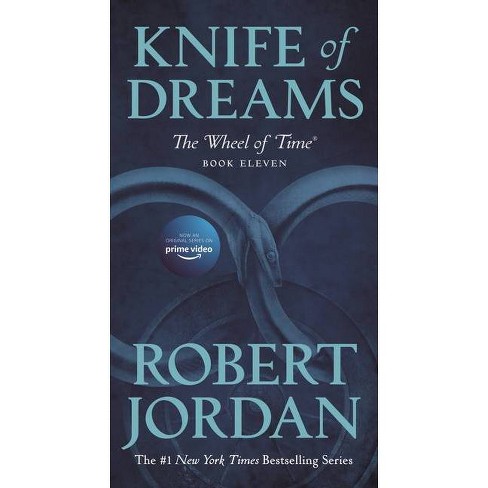 "The Wheel of Time turns and Ages come and go, leaving memories that become legend. Legend fades to myth, and even myth is long forgotten when the Age that gave it birth returns again. In the Third Age, an Age of Prophecy, the World and Time themselves hang in the balance. What was, what will be, and what is, may yet fall under the Shadow. The dead are walking, men die impossible deaths, and it seems as though reality itself has become unstable: All are signs of the imminence of Tarmon Gai'don, the Last Battle, when Rand al'Thor, the Dragon Reborn, must confront the Dark One as humanity's only hope. Unbeknownst to Rand, Perrin has made his own truce with the Seanchan. It is a deal made with the Dark One, in his eyes, but he will do whatever is needed to rescue his wife, Faile, and destroy the Shaido who captured her. Among the Shaido, Faile works to free herself while hiding a secret that might give her her freedom or cause her destruction. And at a town called Malden, the Two Rivers longbow will be matched against Shaido spears. Fleeing Ebou Dar through Seanchan-controlled Altara with the kidnapped Daughter of the Nine Moons, Mat attempts to court the woman to whom he is half-married, knowing that she will complete that ceremony eventually. But Tuon coolly leads him on a merry chase as he learns that even a gift can have deep significance among the Seanchan Blood and what he thinks he knows of women is not enough to save him. In Caemlyn, Elayne fights to gain the Lion Throne while trying to avert what seems a certain civil war should she win the crown ... In the White Tower, Egwene struggles to undermine the sisters loyal to Elaida from within... The winds of time have become a storm, and things that everyone believes are fixed in place forever are changing before their eyes. Even the White Tower itself is no longer a place of safety. Now Rand, Perrin and Mat, Egwene and Elayne, Nynaeve and Lan, and even Loial, must ride those storm winds, or the Dark One will triumph."--Provided by publisher.

In Knife of Dreams, the eleventh novel in Robert Jordan's #1 New York Times bestselling epic fantasy series, The Wheel of Time(R), Tarmon Gai'don, the Last Battle, is upon Rand al'Thor--and now the Dragon Reborn must confront the Dark One as humanity's only hope. The dead are walking, men die impossible deaths, and it seems as though reality itself has become unstable... Abandoning Rand's war against the Dark One, Perrin Aybara has made his own truce with the Seanchan in his obsessive quest to save his wife Faile from the Shaido and destroy their mutual enemies. To achieve victory, Perrin must render the Shaido Wise One channelers in Malden powerless. But even as he puts his desperate plan into action, Masema Dagar, the Prophet of the Dragon, moves against him. Traveling with circus performers through Seanchan-controlled Altara, Mat Cauthon attempts to court Tuon, the Daughter of the Nine Moons, to complete their fateful prophesized marriage. Despite being surrounded by Seanchan seeking to kill her, Mat's intended leads him on a merry chase while he wages guerrilla warfare to protect her. Knowing he cannot defeat the Dark One while at war with the Seanchan, Rand brokers for a truce with the Daughter of the Nine Moons. Unaware of Tuon's actual location, the Dragon Reborn walks into a trap set by the Forsaken Semirhage, who possesses knowledge about his powers that will either shatter or steel his resolve in the forthcoming conflict. Since its debut in 1990, The Wheel of Time(R) by Robert Jordan has captivated millions of readers around the globe with its scope, originality, and compelling characters. The last six books in series were all instant #1 New York Times bestsellers, and The Eye of the World was named one of America's best-loved novels by PBS's The Great American Read. The Wheel of Time(R)
New Spring: The Novel
#1 The Eye of the World
#2 The Great Hunt
#3 The Dragon Reborn
#4 The Shadow Rising
#5 The Fires of Heaven
#6 Lord of Chaos
#7 A Crown of Swords
#8 The Path of Daggers
#9 Winter's Heart
#10 Crossroads of Twilight
#11 Knife of Dreams By Robert Jordan and Brandon Sanderson
#12 The Gathering Storm
#13 Towers of Midnight
#14 A Memory of Light By Robert Jordan and Teresa Patterson
The World of Robert Jordan's The Wheel of Time By Robert Jordan, Harriet McDougal, Alan Romanczuk, and Maria Simons
The Wheel of Time Companion By Robert Jordan and Amy Romanczuk
Patterns of the Wheel: Coloring Art Based on Robert Jordan's The Wheel of Time