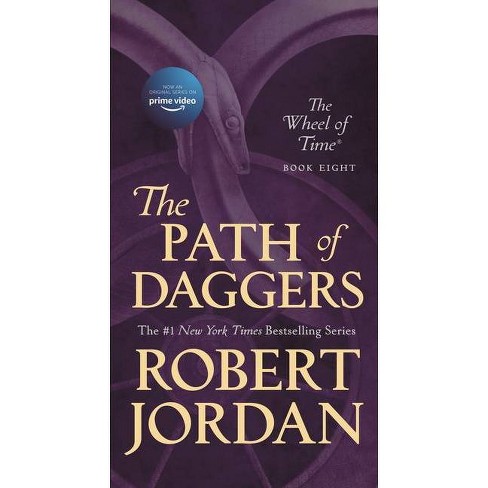 Sequel to A Crown of Swords, this epic volume continues one the most extraordinary work of American fantasy ever published--The Wheel of Time.

In The Path of Daggers, the eighth novel in Robert Jordan's #1 New York Times bestselling epic fantasy series, The Wheel of Time(R), Rand al'Thor engages in battle wearing the Crown of Swords and wielding Callandor against a force unprepared for the wrath of the Dragon Reborn. The Seanchan invaders are heading for Illian--and Rand's army of Asha'man soldiers. When they meet in battle, some of the Asha'man are afflicted by madness, unable to control their channeling and unleashing raw power. The madness extends to Rand himself. He has been hearing the voice of a man believed to have been the previous Dragon Reborn. Besieged by visions and debilitated whenever he uses the One Power, Rand chooses to attack the Seanchan with Callandor. The sword consumes him with a berserker rage, felling ally and enemy alike. And when he regains his senses, Rand finds himself less trusted by those who were once the most loyal. Since its debut in 1990, The Wheel of Time(R) by Robert Jordan has captivated millions of readers around the globe with its scope, originality, and compelling characters. The last six books in series were all instant #1 New York Times bestsellers, and The Eye of the World was named one of America's best-loved novels by PBS's The Great American Read. The Wheel of Time(R)
New Spring: The Novel
#1 The Eye of the World
#2 The Great Hunt
#3 The Dragon Reborn
#4 The Shadow Rising
#5 The Fires of Heaven
#6 Lord of Chaos
#7 A Crown of Swords
#8 The Path of Daggers
#9 Winter's Heart
#10 Crossroads of Twilight
#11 Knife of Dreams By Robert Jordan and Brandon Sanderson
#12 The Gathering Storm
#13 Towers of Midnight
#14 A Memory of Light By Robert Jordan and Teresa Patterson
The World of Robert Jordan's The Wheel of Time By Robert Jordan, Harriet McDougal, Alan Romanczuk, and Maria Simons
The Wheel of Time Companion By Robert Jordan and Amy Romanczuk
Patterns of the Wheel: Coloring Art Based on Robert Jordan's The Wheel of Time

The Dragon Reborn - (Wheel of Time) by Robert Jordan (Paperback)

The Dragon Reborn - (Wheel of Time) by Robert Jordan (Hardcover)