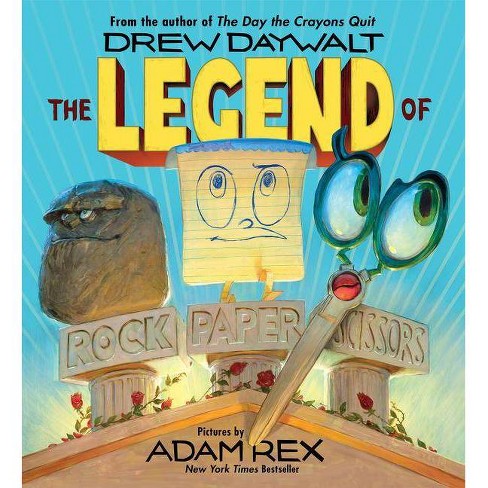 "You've played the game. Now read the legend of the three great warriors who started it all... Rock, Paper, Scissors!"--Front jacket flap.

Will have listeners in stitches. --Kirkus Reviews (starred review)

From acclaimed, bestselling creators Drew Daywalt, author of The Day the Crayons Quit and The Day the Crayons Came Home, and Adam Rex, author-illustrator of Frankenstein Makes a Sandwich, comes a laugh-out-loud hilarious picture book about the epic tale of the classic game Rock, Paper, Scissors.

I couldn't stop laughing while reading this aloud to a group of kids, commented the founder of Bookopolis.com, Kari Ness Riedel.

I hope you're wearing your BATTLE PANTS!

You've played the game. Now read the legend of the three great warriors who started it all . . .

★ "Cheeky humor and prideful asides will have listeners in stitches. A closer-to-perfect pairing couldn't be imagined. Everyone wins!"--Kirkus Reviews (starred review) ★ "Daywalt's text, set in a range of expressive fonts, combines the heightened verbosity of vintage action comics with the swagger of backyard scuffles, and Rex composes wildly dramatic battle scenes against backdrops of thunderstorms, erupting volcanoes, and missile launches. Forget reading aloud--this story demands bombastic, full-volume performances."--Publishers Weekly (starred review) ★ "The earnest gravity of the fighters' quests paired with the mundane setting and melodramatic tone are perfectly balanced to produce a brand of purely absurd, sidesplitting humor that kids will gobble up."--Booklist (starred review) 'The title and cover image are enough to get you giggling all on their own. But the epic battles depicted by children's book powerhouses Drew Daywalt and Adam Rex are sure to have us in stitches." Best Books of the Month--Brightly ★ "Laugh-out-loud funny and outrageous at times, this read-aloud will have listeners jumping out of their seats. This is the sort of story that makes children love to read."--School Library Journal (starred review) ★ "While kids will snicker reading this on their own, it's perfect for a guffawing share with younger sibs or buddy read, followed, of course, by a rousing game of Rock Paper Scissors."--Bulletin of the Center for Children's Books (starred review)
If the item details above aren’t accurate or complete, we want to know about it.

Q: Is this book hardcover?

submitted by - 2 years ago
See all questions (1)

If You Give a Mouse a Cookie (Hardcover) by Laura Numeroff

Pete the Cat Goes Camping - (I Can Read. Level 1) by James Dean (Paperback)

The Crayons Go Back to School - by Drew Daywalt (Hardcover)

Happy Easter from the Crayons - by Drew Daywalt (Hardcover)

Crayons Trick Or Treat - by Drew Daywalt (Board Book)

5 out of 5 stars
Would recommend
Beth - 4 months ago, Verified purchaser
This book is fantastic to read aloud. I’m thinking 2nd graders or older depending on the kids. Nothing bad in it, there’s just a lot of nuance that they would miss.
Did you find this review helpful?

Hit with my four yr old

5 out of 5 stars
Would recommend
nmc - 8 months ago, Verified purchaser
Well my four year old wants to read this every night, followed by several rounds of rock, paper, scissors so I guess it’s a hit!
Did you find this review helpful?