The Maid - by Kimberly Cutter (Paperback) 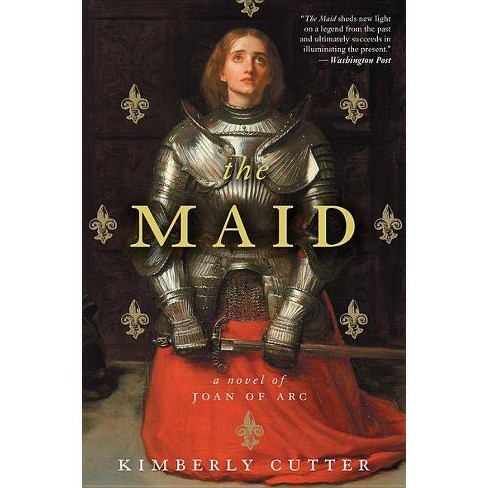 The Maid sheds new light on a legend from the past and ultimately succeeds in illuminating the present.-- The Washington Post Was Joan of Arc a messenger from God, a lunatic, or just a petulant kid? She's a little of each in this beautifully written novel, which follows Jehanne from her girlhood to the Hundred Years' War . . . to her death at 19, burned at the stake in the Rouen marketplace. Cutter presents Jehanne as part mystic, but also part mascot used by France to rally support from the peasants. In The Maid's best scenes, she couldn't be more human. -- Entertainment Weekly

Was she a saint or a witch? A visionary or a madwoman? Or an extraordinary peasant girl who, at God's bidding, led an army, saved France and paid the price by burning alive? . . .Kimberly Cutter's portrait of 'Jehanne' as a strange, gritty teenage tomboy and true believer is compelling. -- USA Today

Cutter brings Jehanne d'Arc to life, complete with the visions, voices, courage, and superpowers she used to persuade thousands to follow her into battle to save her beloved France from the English army. Cutter's Joan is conflicted [and] the battles are gory. . . -- Daily Candy

Joan of Arc, the teenage peasant girl who commanded a French army, was burned at the stake, and eventually declared a saint, exists in our collective imagination as more myth than human being. . . Cutter strips away the romanticism in favor of a more complex portrayal that raises some provocative questions. -- O Magazine

No one has ever written a fictional treatment of Joan of Arc that encompasses 'The Maid of Orleans' the way Kimberly Cutter has. From Jehanne's poverty-stricken upbringing, to her peculiar relationship with France's Dauphin, to her bloodthirsty battle actions and finally, to her sad last days, this book brings a misunderstood figure to blazing life. -- Minneapolis Star-Tribune

Cutter evokes the novel's medieval world with striking details. Wounds are dressed in olive oil and cotton, and stork is eaten for dinner. King Charles appears 'in his white nightdress, hair trailing down his back in thin, oiled tentacles, ' and a starving, naked woman stuffs dirt in her mouth 'greedily, as if it were a butter tart.' -- The New York Times Book Review

A fiery portrait of one of history's most exalted heroines. Cutter's lavish imagery is outstanding and her dynamic characters are truly absorbing. The Maid is a triumphant re-imagining of a courageous, faithful and remarkably resilient woman. -- Amanda Foreman, author of Georgiana and A World on Fire

Cutter brings fresh insight to the story of Joan of Arc in this dynamic page-turner...The exhilaration of her many triumphs on the battlefield, the bloody combat, the deadly jealousies and political machinations that begin her undoing, and her tragic end are portrayed with vivid imagination and brio. In this stunning debut, Cutter pays vibrant homage to this legendary woman. -- Publishers Weekly, starred review The Maid is a brilliant portrait of Joan of Arc that peels away the layers of myth to reveal the inner world of an astonishing human being. Cutter has given new life to one of the most incredible women of all time. -- Danielle Trussoni, author of Angelology