The Return - by Nicholas Sparks 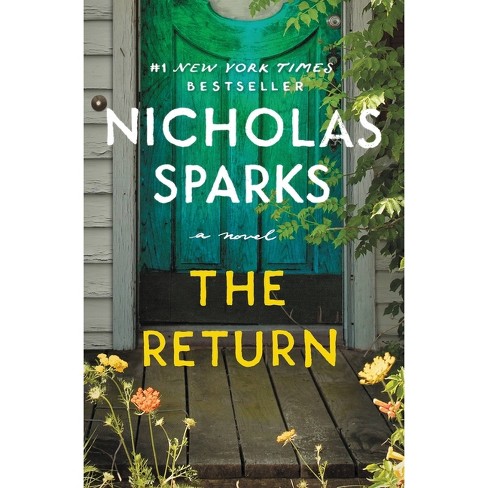 In the romantic tradition of Dear John, an injured Navy doctor meets two extremely important women whose secrets will change the course of his life in this #1 New York Times bestseller. Trevor Benson never intended to move back to New Bern, North Carolina. But when a mortar blast outside the hospital where he worked sent him home from Afghanistan with devastating injuries, the dilapidated cabin he'd inherited from his grandfather seemed as good a place to regroup as any. Tending to his grandfather's beloved beehives, Trevor isn't prepared to fall in love with a local . . . yet, from their very first encounter, Trevor feels a connection with deputy sheriff Natalie Masterson that he can't ignore. But even as she seems to reciprocate his feelings, she remains frustratingly distant, making Trevor wonder what she's hiding. Further complicating his stay in New Bern is the presence of a sullen teenage girl, Callie, who lives in the trailer park down the road. Trevor hopes Callie can shed light on the mysterious circumstances of his grandfather's death, but she offers few clues--until a crisis triggers a race to uncover the true nature of Callie's past, one more intertwined with the elderly man's passing than Trevor could ever have imagined. In his quest to unravel Natalie and Callie's secrets, Trevor will learn the true meaning of love and forgiveness . . . and that in life, to move forward, we must often return to the place where it all began.

The Return reads at times like a fine mystery, but with the added benefit of Sparks's mature writing in crafting a love story that will inflame his longtime fans.--Mountain Times

[Nicholas Sparks's] descriptions of the charms of downtown New Bern and the beauty of Brices Creek made me want to . . . rush to spend a few days there.--Chatham Journal Newspaper

As much a family drama as it is a love story . . . If you, like Trevor, are looking to slow down and focus on what's really important, The Return is the heartwarming read you've been waiting for.--BookPage

Deeply reflective . . . Sparks's latest novel reminds [us] that we're all human . . . Will pull you in from the very first page.--POPSUGAR

Sparks fans will love it, and readers new to his romantic fiction will be hooked.--Northern Virginia Magazine

Take a trip to rural North Carolina, sit back, and enjoy the lush descriptions of the rambling creek and croaking frogs. Beautiful sunsets, meandering boat trips, exotic wildlife, buzzing bees, and small-town farmers' markets abound. Keep Trevor company as he navigates mysteries and spends time recovering from his personal demons . . . The Return [makes] for a perfect beach read or a fall/winter sitting-by-the-fire read.--Bookreporter.com

Will sweep you off your feet . . . [a] story of secrets, seduction, and forgiveness you'll want to read over and over again.--CNN Underscored

With over 100 million copies of his books sold, Nicholas Sparks is one of the world's most beloved storytellers. His novels include sixteen #1 New York Times bestsellers, and all of his books, including Three Weeks with My Brother, the memoir he wrote with his brother, Micah, have been New York Times and international bestsellers, and were translated into more than fifty languages. Eleven of Nicholas Sparks's novels--The Choice, The Longest Ride, The Best of Me, Safe Haven, The Lucky One, The Last Song, Dear John, Nights in Rodanthe, The Notebook, A Walk to Remember, and Message in a Bottle--have been adapted into major motion pictures.
If the item details above aren’t accurate or complete, we want to know about it.

The Wish - by Nicholas Sparks

The Rescue - by Nicholas Sparks (Paperback)

The Last Thing He Told Me - by Laura Dave (Hardcover)

In Five Years - by Rebecca Serle

The Return - by Nicholas Sparks (Hardcover)

The Return - by Nicholas Sparks (Paperback)

The Wish - by Nicholas Sparks

Every Breath - by Nicholas Sparks (Paperback)

4 out of 5 stars
Prettydarngirly - 8 months ago
I absolutely LOVE Nicholas Sparks books, they are such a quick and easy read for me. I love being able to sit down and just be really drawn into a story and wanting to not put my book down and usually Nicholas Sparks books do that for me. This book I found to be great and not wanting to put the book down but also very predictable. I found myself coming to the conclusion before the character did and I just really hated that. This books ending was also just absolutely heartbreaking, which most of the time is exactly what a Nicholas Sparks book is, but I just hated the ending. I did love that this main character was a medical doctor because my husband is a MD and I loved just reading something familiar that I could connect with and I found a lot of that information about residency to be true, which I loved seeing being represented! I would recommend this book especially because they are making it into a movie and I just can not wait to see this book come to life!
Did you find this review helpful?

5 out of 5 stars
Would recommend
Fannie - 9 months ago, Verified purchaser
The author knows how to create characters with human flaws and doesn’t try to dress them up. I adored the book!
Did you find this review helpful?

5 out of 5 stars
Would recommend
Pinner22 - 1 year ago
Love anything Nicholas Sparks writes!
1 guest found this review helpful. Did you?

3 out of 5 stars
Would not recommend
Valerie - 2 years ago
So I love Nicolas Sparks, overall it’s a good book (of course) it’s like most of his books, guy meets girl, fall in love, tragedy strikes. However, this had a cool plot twist! I constantly was raising my eyebrow at Callie and trying to put together what her deal was.. But y’all the ending fell flat. It was like he wrote it specifically for a movie, not a reader.... and that’s what sucks. He didn’t give visuals and that connection you need to close the book. It felt like he was bored and was like “happily ever after, done.” I would of like it better if Bradley Cooper and Blake Lively were staring in the movie but whatever.
8 guests found this review helpful. Did you?

3 out of 5 stars
Would recommend
Gaelicark - 2 years ago
I was really excited to get my hands on this book and start reading. It's been a while since I read a Sparks book, so the anticipation was high. It started out a bit slow for me, then picked up speed as it moved along. I enjoyed the mystery aspect to it, I think that lifted it up for me... the mystery and the bees. Sparks fans will find he has kept to his roots as this will get you in the feels frequently.
2 guests found this review helpful. Did you?

5 out of 5 stars
Vicklea - 2 years ago
I absolutely loved this new romance that touched my heart in all of the right places. Trevor Benson is a Navy Vet recovering from a serious injury. He returns to his grandfather’s home in New Bern, NC to make some serious life choices. It also seemed to me that he was there to say farewell to his beloved grandfather. While there, he meets a deputy in the sheriff’s department, Natalie Masterson, and the two fall hard for each other. But there is a complication that just broke my heart. No one can break your heart and put it back together again like this master storyteller! Then, there was the subplot of teen-ager Callie who was like a porcupine. She wanted to be left alone but she also needed to survive. Trevor’s stepping in to try to befriend and help Callie was so touching. I could just imagine the whole thing! I think my favorite parts were when the author educated me about beekeeping. As Trevor cares for his grandfather’s bees, he tells Natalie what he is doing and why and I learned more than I thought possible. I also enjoyed the setting since I have family in the New Bern area. There was nothing about this book that I did not enjoy, so I highly recommend it. I own a copy of the book and all opinions expressed are my own.
6 guests found this review helpful. Did you?

5 out of 5 stars
Would recommend
Karen - 2 years ago
A compelling novel...difficult to stop reading! Another excellent one by Nicholas Sparks!!
2 guests found this review helpful. Did you?

5 out of 5 stars
Would recommend
Book Fan - 2 years ago
I am a huge fan of Nicholas Sparks’ work and when I hear he is launching a new book, I always get it at Target. Clean store and friendly staff and a 30% discount on the cover price. Nicholas Sparks and Target...a win - win situation!
4 guests found this review helpful. Did you?

5 out of 5 stars
Would recommend
Vickie - 2 years ago
Loved this book. Read it in 2 days!! Another Nicholas Sparks great read. He is the only author I will buy the hard cover when it first comes out!
2 guests found this review helpful. Did you?

4 out of 5 stars
Melissa - 2 years ago
Great book, Has the normal twists and turns of the typical Nicholas Sparks book. I feel like this was a little lack luster but overall a decent read. LOVE LOVE LOVE that the cover has a holiday cover option.
5 guests found this review helpful. Did you?

5 out of 5 stars
Would recommend
Pinky - 2 years ago
Great book- a must read and again he has done a wonderful job
Did you find this review helpful?

5 out of 5 stars
Would recommend
Casey - 2 years ago
So glad Nicholas Sparks had a new release. He never fails to write a book worth reading!
2 guests found this review helpful. Did you?