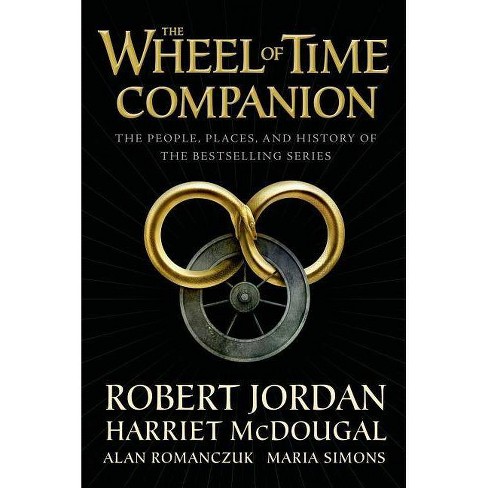 Since its debut in 1990, The Wheel of Time(R) by Robert Jordan has captivated millions of readers around the globe with its scope, originality, and compelling characters. The definitive encyclopedia of the series, the companion sheds light on some of the most intriguing aspects of the world, including biographies and motivations of many characters that never made it into the books, but helped bring Jordan's world to life. Over the course of fifteen books and millions of words, the world that Jordan created grew in depth and complexity. However, only a fraction of what Jordan imagined ended up on the page, the rest going into his personal files. Included in the volume in an A-to-Z format are: An entry for each named character
An inclusive dictionary of the Old Tongue
New maps of the Last Battle
New portraits of many characters
Histories and customs of the nations of the world
The strength level of many channelers
Descriptions of the flora and fauna unique to the world
And much more! The Wheel of Time Companion is required reading for The Wheel of Time's millions of fans. The Wheel of Time(R)
New Spring: The Novel
#1 The Eye of the World
#2 The Great Hunt
#3 The Dragon Reborn
#4 The Shadow Rising
#5 The Fires of Heaven
#6 Lord of Chaos
#7 A Crown of Swords
#8 The Path of Daggers
#9 Winter's Heart
#10 Crossroads of Twilight
#11 Knife of Dreams By Robert Jordan and Brandon Sanderson
#12 The Gathering Storm
#13 Towers of Midnight
#14 A Memory of Light By Robert Jordan and Teresa Patterson
The World of Robert Jordan's The Wheel of Time By Robert Jordan and Amy Romanczuk
Patterns of the Wheel: Coloring Art Based on Robert Jordan's The Wheel of Time

"The definitive American fantasy saga, a fantasy tale seldom equaled and still less often surpassed in English." --Chicago Sun-Times "Hard to put down for even a moment. A fittingly epic conclusion to a fantasy series that many consider one of the best of all time." --San Francisco Book Review

HARRIET MCDOUGAL, former Editorial Director of Tom Doherty Associates, was Robert Jordan's wife and editor. She selected Brandon Sanderson to complete the series after Jordan's untimely death, and was his editor. She is the main editor of the Wheel of Time Companion. ALAN ROMANCZUK and MARIA SIMONS were Robert Jordan's editorial assistants for a combined 18 years, and Harriet's for 14. They worked with Brandon Sanderson to complete the last three volumes of the series.
If the item details above aren’t accurate or complete, we want to know about it.

Origins of the Wheel of Time - by Michael Livingston (Hardcover)

The Reader's Companion to Ireland - by Alan Ryan (Paperback)