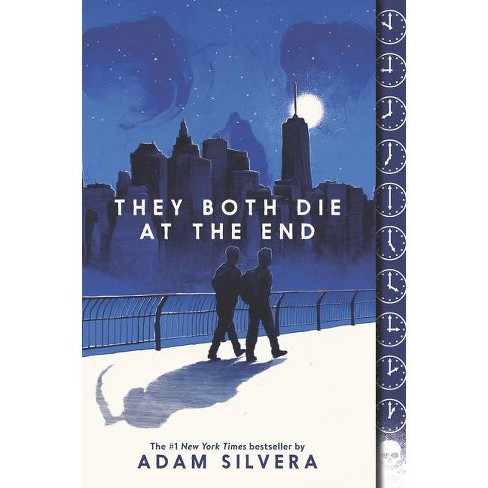 Silvera's heartbreaking but hopeful instant "New York Times" is now in paperback. In a world where people receive a phone call on the day they're going to die, Rufus and Mateo meet through an app and come up with a perfect plan to live their last hours to the fullest.

Adam Silvera reminds us that there's no life without death and no love without loss in this devastating yet uplifting story about two people whose lives change over the course of one unforgettable day.

On September 5, a little after midnight, Death-Cast calls Mateo Torrez and Rufus Emeterio to give them some bad news: They're going to die today.

Mateo and Rufus are total strangers, but, for different reasons, they're both looking to make a new friend on their End Day. The good news: There's an app for that. It's called the Last Friend, and through it, Rufus and Mateo are about to meet up for one last great adventure--to live a lifetime in a single day.

In the tradition of Before I Fall and If I Stay, They Both Die at the End is a tour de force from acclaimed author Adam Silvera, whose debut, More Happy Than Not, the New York Times called "profound."

Featuring a map of the novel's characters and their connections, an exclusive essay by the author, and a behind-the-scenes look at the early outlines for this critically acclaimed bestseller.

We here at Last Friend Inc. are collectively sorry for this loss of you.

Our deepest sympathies extend to those who love you and those who will never meet you.

We hope you find a new friend of value to spend your final hours with today.

On September 5, a little after midnight, Death-Cast calls Mateo Torrez and Rufus Emeterio to deliver some bad news: They're going to die in less than twenty-four hours. Mateo and Rufus are total strangers, but, for different reasons, they're both looking to make a new friend on their End Day. The good news is there's an app for that. It's called Last Friend, and through it, Rufus and Mateo meet up for one final epic adventure--to live a lifetime in a single day.

★"Extraordinary and unforgettable."--Booklist (starred review) ★"It's another standout from Silvera. Engrossing, contemplative, and as heart-wrenching as the title promises."--Kirkus Reviews (starred review) ★"Over the course of an eventful day, these thoughtful young men speak honestly and movingly about their fate, their anger at its unfairness, and what it means to be alive, until their budding friendship organically turns into something more."--Publishers Weekly (starred review) ★ "Silvera continues to masterfully integrate diversity, disability, and young queer voices into an appealing story with a lot of heart. A must-have for YA shelves."--School Library Journal (starred review) "They Both Die at the End is beautiful and charged with emotion, and Silvera's best work to date."--Jordan April, The River's End Bookstore, for the Autumn 2017 Teen Indie Next List "A bold, lovely, and haunting story of loss, hope, and the redeeming power of friendship."--Lauren Oliver, New York Times bestselling author of Before I Fall "Adam Silvera uses his ample skill to force readers to examine how they live life now and how they want to live it. They Both Die at the End is a prime example of his skill at asking the most relevant questions of all of us."--Teen Vogue "Silvera not only poignantly captures the raw emotion of facing your own morality, but creates such relatable and authentic characters you want to follow on their journey. His gorgeous writing and wonderful storytelling will wreck you in the very best possible way."--Buzzfeed "Themes of friendship, love, loss, and fate combine in this novel that should be read with a box of tissues close at hand."--Brightly
If the item details above aren’t accurate or complete, we want to know about it. Report incorrect product info.