They Wish They Were Us - by Jessica Goodman 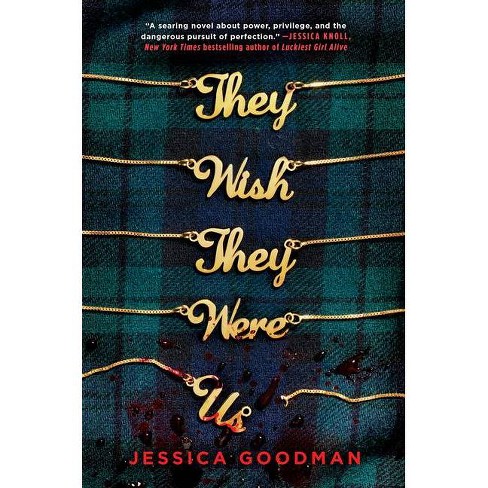 At an exclusive prep school on Long Island, Jill Newman looks forward to her senior year as a member of the school's most elite clique, the Players, until new evidence surfaces about the murder of her close friend Shaila.

"A pristine infusion of Gossip Girl and Netflix's Elite, this prep-school thriller has it all: plaid skirts, secret societies, and a gripping murder mystery, but paired with an adept critique of the powers and privileges that goeth before the fall." - Elle In Gold Coast, Long Island, everything from the expensive downtown shops to the manicured beaches, to the pressed uniforms of Jill Newman and her friends, looks perfect. But as Jill found out three years ago, nothing is as it seems. Freshman year Jill's best friend, the brilliant, dazzling Shaila Arnold, was killed by her boyfriend. After that dark night on the beach, Graham confessed, the case was closed, and Jill tried to move on. Now, it's Jill's senior year and she's determined to make it her best yet. After all, she's a senior and a Player--a member of Gold Coast Prep's exclusive, not-so-secret secret society. Senior Players have the best parties, highest grades and the admiration of the entire school. This is going to be Jill's year. She's sure of it. But when Jill starts getting texts proclaiming Graham's innocence, her dreams of the perfect senior year start to crumble. If Graham didn't kill Shaila, who did? Jill vows to find out, but digging deeper could mean putting her friendships, and her future, in jeopardy.

An Instant Indiebound Bestseller "[A]n engrossing story of evil, upscale Long Island teens." - Variety "The chilling murder mystery is an irresistible hook, but it's the careful building of each character's fraught, internal conflicts that really digs in, elevating the work from a high society whodunit to a knowing mission to not just uncover one's own identity, but to build it." - Esquire, Best Books of 2020

"Gossip Girl but make it a juicy murder mystery." - E! Online "A pristine infusion of Gossip Girl and Netflix's Elite, this prep-school thriller has it all: plaid skirts, secret societies, and a gripping murder mystery, but paired with an adept critique of the powers and privileges that goeth before the fall." - Elle "Jessica Goodman's thrilling debut is a modern-day Gossip Girl--but darker." - Marie Claire, The Best Fiction by Women in 2020 "One of this summer's buzziest reads." - Entertainment Weekly "Jessica Goodman's debut mystery is a true page-turner, but it's her exploration of Gold Coast's high-achieving, socioeconomically stratified culture that sets They Wish They Were Us apart on the shelf." - BookPage, Most Anticipated YA Books of the Summer "Goodman deftly explores the complex nature of friendship, privilege, grief, and the often crushing expectations placed on teens, all of which dovetails neatly with a twisty murder mystery....A sophisticated and suspenseful debut." - Kirkus "This debut murder mystery is filled with twists and turns that will keep its pages turning." - Booklist "Fast-paced and completely consuming--I was swept into this riveting mystery from beginning to end. They Wish They Were Us smartly explores the complexities of friendship, the secrets and lies buried under the picturesque façade, and the ultimate cost of perfection."
--Megan Miranda, New York Times bestselling author of All the Missing Girls, The Perfect Stranger, and The Last Guest House A whip-smart mystery with a pitch-perfect voice.
-- Kara Thomas, author of The Cheerleaders, Little Monsters and The Darkest Corners A juicy, fast-paced, addictive tale that's more than a mystery--it's a timely exploration of ambition, loyalty, and how far we'll go to belong. I couldn't put it down.
-- Andrea Bartz, author of The Lost Night "Seductive and slick, They Wish They Were Us is a searing novel about power, privilege, and the dangerous pursuit of perfection. You'll remember the girls of Gold Coast Prep Long after the last page."--Jessica Knoll, New York Times bestselling author of The Luckiest Girl Alive and The Favorite Sister

Jessica Goodman is a senior editor at Cosmopolitan. They Wish They Were Us is her debut novel.

One of Us Is Lying - by Karen M. Mcmanus (Hardcover)

The Summer I Turned Pretty (Paperback) by Jenny Han

They Wish They Were Us - by Jessica Goodman (Paperback)

The Counselors - by Jessica Goodman (Hardcover)

We Are Inevitable - by Gayle Forman

The Woods Are Always Watching - by Stephanie Perkins

Skip to Chapter 10 and Beyond

3 out of 5 stars
Would recommend
Tiny T - 2 years ago, Verified purchaser
It has a slow start, but has a great plot twist.
3 guests found this review helpful. Did you?

5 out of 5 stars
great book - 2 years ago
amazing!!! highly recommend. great characters and lots of twist
2 guests found this review helpful. Did you?