What We Owe the Future - by William Macaskill (Hardcover) 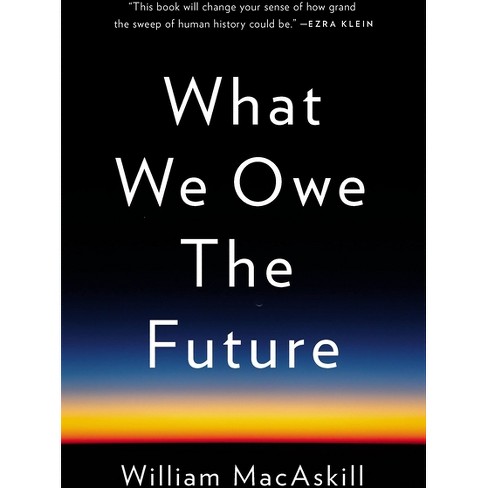 "One of the most stunning achievements of moral philosophy is something we take for granted: moral universalism, or the idea that every human has equal moral worth. In What We Owe the Future, Oxford philosopher William MacAskill demands that we go a step further, arguing that people not only have equal moral worth no matter where or how they live, but also no matter when they live. This idea has implications beyond the obvious (climate change) - including literally making sure that there are people in the future: It's not unusual to hear someone way, "Oh, I could never bring a child into this world." MacAskill argues that the sentiment itself may well be immoral: we have a responsibility not just to consider whether the world of the future will be suitable for supporting humans, but to act to make sure there are humans in it. And while it may seem that the destructive capacity of modern industrial technology means that we ought to eschew it as much as possible, MacAskill argues for optimism in our ability to (eventually) get technology right, for the future's benefit, and ours. Where Hans Rosling's Factfulness and Rutger Bregman's Utopia for Realists gave us reasons for hope and action in the present, What We Owe the Future is a compelling and accessible argument for why solving our problems demands that we worry about the future. And ultimately it provides an answer to the most important question we humans face: can we not just endure, but thrive?"--

"This book will change your sense of how grand the sweep of human history could be, where you fit into it, and how much you could do to change it for the better. It's as simple, and as ambitious, as that."
--Ezra Klein An Oxford philosopher makes the case for "longtermism" -- that positively influencing the long-term future is a key moral priority of our time. The fate of the world is in our hands. Humanity's written history spans only five thousand years. Our yet-unwritten future could last for millions more -- or it could end tomorrow. Astonishing numbers of people could lead lives of great happiness or unimaginable suffering, or never live at all, depending on what we choose to do today. In What We Owe The Future, philosopher William MacAskill argues for longtermism, that idea that positively influencing the distant future is a key moral priority of our time. From this perspective, it's not enough to reverse climate change or avert the next pandemic. We must ensure that civilization would rebound if it collapsed; counter the end of moral progress; and prepare for a planet where the smartest beings are digital, not human. If we make wise choices today, our grandchildren's grandchildren will thrive, knowing we did everything we could to give them a world full of justice, hope and beauty.

"In focusing on the interests of future generations stretching into an indefinitely long future, MacAskill has thrust an important and neglected argument into the spotlight, while making it vivid and fun to read. He hopes this book will change the world, and it might."--Financial Times (UK)

"What We Owe the Future is an intellectually thrilling exploration of moral philosophy and human history in the hands of a very skilled thinker and clear writer... Thought provoking."--Charter

"Unapologetically optimistic and bracingly realistic, this is the most inspiring book on 'ethical living' I've ever read."--The Guardian (UK)

"What We Owe the Future is an instructive, intelligent book. It has a lot to teach us about history and the future, about neglected risks and moral myopia."--Boston Review

"I expected William MacAskill to write a forceful and persuasive argument for caring more about future people and this book did not disappoint. But it's so much more--What We Owe The Future is an engaged and deeply original exploration of questions ranging from the contingency of moral progress, to the perils of AI, to the very nature of a happy and fulfilled life. It's an important, stimulating, and delightful book."

"Touchingly optimistic... With something to ponder on every page, a bracing exhortation to do right by the people of centuries to come."

"MacAskill delivers a sweeping analysis of contemporary dangers that masterfully probes the intersections of technology, science, and politics, while offering fascinating glimpses into humanity's possible futures. This urgent call to action will inspire and unnerve in equal measure."--Publishers Weekly

"To assess what really matters it always helps to zoom out, and Will MacAskill is probably the world's best zoom-outer. What We Owe The Future brilliantly shows us the biggest picture of all and persuasively reminds us of the vast impact we can all have."

--Tim Urban, co-founder of Wait but Why

"What We Owe The Future makes the case for thinking seriously about the very long term. It gives a profoundly new perspective on human civilization and our place in it."
--Lydia Cacho, journalist and author of The Demons of Eden

"An extraordinary book. I've never read something so deep and fundamental, and so accessible at the same time . . . The publication of this book is a monumental event. William MacAskill is one of the most important philosophers alive today, and this is his magnum opus."--Rutger Bregman, Dutch historian and author of Utopia for Realists

"An optimistic look at the future that moved me to tears."
--Joseph Gordon-Levitt, actor

"Many books promise a new 'big idea', but few deliver one as brilliant as MacAskill's in What We Owe The Future. A fascinating, profound read."
--Julia Galef, author of The Scout Mindset

"No living philosopher has had a greater impact upon my ethics than Will MacAskill. In What We Owe The Future, MacAskillhas transformed my thinking once again, by patiently dismantling the lazy intuitions that rendered me morally blind to the interests of future generations. This is an altogether thrilling and necessary book."
--Sam Harris, five-time New York Times bestselling author and host of the Making Sense podcast

"There are moments when we can change outcomes easily, but if we don't bend those curves right then, we can lock in enormous long-term damage. This fascinating book makes us think relentlessly and usefully about such pivot points; few prods could be more important."
--Bill McKibben, environmentalist and author of The End of Nature

"This mind-bending, eon-hurtling, visionary, masterful book raises questions that are among the most crucial we face as a species. MacAskill makes a moral case for the future that is urgent, clear, and utterly convincing."
--Larissa MacFarquhar, staff writer for The New Yorker and author of Strangers Drowning

"This book will change your sense of how grand the sweep of human history could be, where you fit into it, and how much you could do to change it for the better. It's as simple, and as ambitious, as that."--Ezra Klein, host of The Ezra Klein Show podcast

"This is a book of great daring, clarity, insight and imagination. To be simultaneously so realistic and so optimistic, and always so damned readable ... that is a miracle for which MacAskill should be greatly applauded."
--Stephen Fry, actor

"Warning: This book may radically upgrade your ethics and expand your compassion. What We Owe The Future is an inspiring roadmap to how we can try to improve the lives of the billions and trillions sentient beings yet to come. It's perhaps our greatest moral duty. So please do yourself - and your grandchildren's grandchildren's grandchildren - a favor and read this book."
--AJ Jacobs, editor at large of Esquire Magazine

William MacAskill  is an associate professor in philosophy at the University of Oxford, and the most widely cited philosopher of his age. A TED speaker and past Forbes 30 Under 30 social entrepreneur, he also cofounded the Centre for Effective Altruism, which has raised over $1 billion for charities. He lives in Oxford, England.
If the item details above aren’t accurate or complete, we want to know about it.