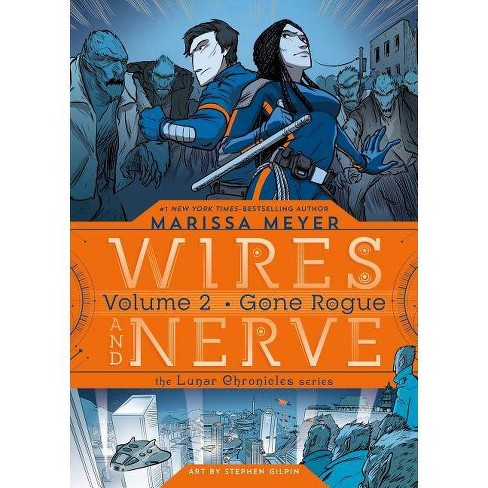 The world of the Lunar Chronicles comes alive in this thrilling continuation of "Wires and Nerve, " which finds Iko and the Lunar crew battling rogue soldiers as they work to unify Earth and Luna.

The world of the Lunar Chronicles comes alive in this thrilling continuation of Wires and Nerve. Iko--an audacious android and best friend to the Lunar Queen Cinder--has been tasked with hunting down Alpha Lysander Steele, the leader of a rogue band of bioengineered wolf-soldiers who threaten to undo the tenuous peace agreement between Earth and Luna. Unless Cinder can reverse the mutations that were forced on them years before, Steele and his soldiers plan to satisfy their monstrous appetites with a massacre of the innocent people of Earth. And to show he's serious, Steele is taking hostages. Cinder and Kai, Scarlet and Wolf, Cress and Thorne, and Winter and Jacin all feature in this epic new battle. But it is Iko who must face her deepest fears when she uncovers the truth about her own unusual programming. Questions of love, friendship, and mortality take Iko on an emotional journey that will satisfy and delight fans of this bestselling series.

Cinder's friends are in danger at the hands of Alpha Lysander Steele and his pack of Lunar wolf soldiers, out for revenge against the queen for not reversing their genetic deformations. As tensions mount and people are kidnapped, the peace between Lunar and Earth is not the only thing in danger, so is Cinder's life. The star of this story is still [android] Iko, who finds out more about her creation and how human she really can be despite her antagonistic, will-they/won't-they relationship with Kinney. ...Builds to a satisfying ending for all characters involved. -- Voices of Youth Advocates, starred review

Android Iko is still hunting down rogue wolf-soldier Steele, but her quest takes on a new urgency after he convinces Iko's friend Wolf to join his renegade cause. Now Iko and the frustrating (but handsome!) guard Liam Kinney must scramble to prevent a massacre during Cinder's visit to Earth for the annual Peace Festival. ...Fans will be delighted to revisit Meyer's futuristic Earth and her young saviors. --Booklist Recent Praise for The Lunar Chronicles:
#1 New York Times bestseller, Children's series list
#2 Bestseller (Winter), Publishers Weekly Fiction List
#3 Bestseller (Winter), USA Today Fiction List (adult and children's combined) "A mash-up of fairy tales and science fiction . . . a cross between Cinderella, The Terminator, and Star Wars." --Entertainment Weekly "Prince Charming among the cyborgs." --The Wall Street Journal Heartless:
#1 New York Times bestseller "In Heartless, the nonsense that is Wonderland gets a reverential makeover, full of heart and its own idiosyncratic character." --Gregory Maguire, author of Wicked and After Alice "The author's best fantasy yet. . . . Meyer has woven all the elements of darkness and light, fate and free will, and love and hatred into an unforgettable story of the evolution of the Red Queen from a young girl who dreamed of true love and freedom to a madwoman best remembered for the phrase 'Off with his head.' If you only read one fractured fairy tale this year, make it Heartless. A must-have title." --School Library Journal, starred review

Marissa Meyer is the New York Times--and USA Today--bestselling author of the Lunar Chronicles, and the stand-alone novel Heartless, also a #1 New York Times bestseller. Wires and Nerve is her first graphic novel. She lives in Tacoma with her husband and their children.

Stephen Gilpin lives and works in a cave just north of Hiawatha, Kansas, with his wife, their kids, and an infestation of dogs.
If the item details above aren’t accurate or complete, we want to know about it.