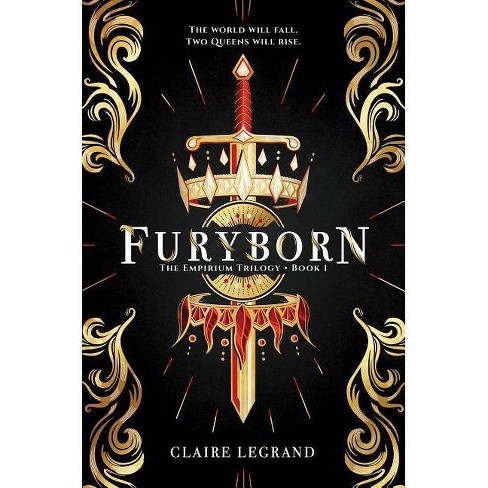 In this thrilling trilogy, a magic-wielding queen and a ruthless bounty hunter are separated by centuries but connected by a prophecy. "An addictive, fascinating fantasy. Truly not to be missedE"--Kendare Blake, #1 "New York Times"-bestselling author of the Three Dark Crowns series.es.

Furyborn is an epic YA fantasy about two fiercely independent young women, centuries apart, who hold the power to save their world...or doom it.

When assassins ambush her best friend, Rielle Dardenne risks everything to save him, exposing herself as one of a pair of prophesied queens: a queen of light, and one of blood. To prove she is the Sun Queen, Rielle must endure seven elemental magic trials. If she fails, she will be executed as the Blood Queen...unless the trials kill the queen first.

One thousand years later, the legend of Queen Rielle is a fairy tale to Eliana Ferracora. A bounty hunter for the Undying Empire, Eliana believes herself untouchable--until her mother vanishes. To find her, Eliana joins a rebel captain and discovers that the evil at the empire's heart is more terrible than she ever imagined.

As Rielle and Eliana fight in a cosmic war that spans millennia, their stories intersect, and the shocking connections between them ultimately determine the fate of their world--and of each other.

Furyborn by Claire Legrand is the epic start to a YA fantasy trilogy focused on two very different and fascinating young women, a delicious villain, non-stop action, and heart-pounding romance. A fantastic read! - Morgan Rhodes, New York Times bestselling author of the Falling Kingdoms series Furyborn is epic and unforgettable. I was immediately captivated by the story of two powerful young women fighting to survive in this vivid, unique fantasy world. A must-read! - Amy Tintera, New York Times bestselling author of the Ruined trilogy A dark yet rousing adventure story that combines passion and danger at every turn. - Booklist A page-turner. Readers will find the complex and flawed characters immensely relatable. The two narratives are deftly interwoven, and plot twists will keep teens on the edge of their seats. - School Library Journal, popular pick Beautiful, brutal, heart-stopping, and epic, Furyborn is a world to lose yourself in--just bring weapons. It's dangerous there. - Laini Taylor, New York Times bestselling author of Strange the Dreamer and the Daughter of Smoke and Bone saga Claire Legrand'sÂ FurybornÂ is as complex as the angels it depicts--captivating and lovely, volatile and deadly. The contrast of elegant, stately court politics with gritty, blood-soaked war is balanced perfectly alongside shifting timelines, blurred prophecies, and a sprawling cast of characters, each more alluring than the last. Furyborn is a sexy, luscious shiver of a book. - Sara Raasch, Â New York TimesÂ bestselling author of the Snow Like Ashes Trilogy For a trip into a wholly new universe in which women are furious, dangerous, and capable of making or ending the world, Furyborn is a must-read. - Refinery29 From the opening pages, Claire Legrand's Furyborn plunges the reader into a captivatingly imaginative world filled with intrigue and deception. Beauty wars with violence as the stories of these two fierce women intertwine with stunning results. Furyborn will leave you breathless and aching for more. - Lisa Maxwell, New York Times bestselling author of The Last Magician High stakes, epic scope, intense action, and sweeping mythologies.
- Kirkus Reviews I tried to stop reading Furyborn and go to bed... then I got up and kept going. Epic in scope, endless in imagination, this book will grab hold of you and refuse to let go. - Amie Kaufman, New York TimesÂ bestselling author of The Illuminae Files and the Starbound Trilogy Immersive and intricate, Furyborn is a kick-you-in-the-teeth and grab-you-by-the-heart tale of two queens. - Roshani Chokshi, New York Times bestselling author of The Star-Touched Queen and A Crown of Wishes In an epic that spans a millennium, Legrand serves up a veritable feast of magic: mystical beings, ruthless power struggles, and gorgeously cinematic writing that will sweep you off your feet. - Traci Chee, New York Times bestselling author of the Sea of Ink and Gold series Legrand has created magic on every page. Flawed, smart, and fierce heroines kept me dazzled and breathless. Furyborn is explosive and stunning. - Â- Mary E Pearson, New York Times bestselling author of The Remnant Chronicles and The Jenna Fox Chronicles Set in an immersive world of elemental magic, legendary godsbeasts, and cutthroat assassins, Claire Legrand'sÂ FurybornÂ is an addictive, fascinating fantasy. Truly not to be missed, this story of two fierce queens battling their way across two different eras will have you on the edge of your seat. - Kendare Blake, #1Â New York TimesÂ bestselling author of the Three Dark Crowns series Strikingly vivid prose...the nearly five hundred pages race by in stunning fashion. This is a must-have for fans of Marchetta's Lumatere Chronicles (Finnikin of the Rock, or Cashore's Graceling. - Bulletin of the Center for Children's Books, starred review This first book of a planned trilogy will not supply all of the answers but will nevertheless enthrall fans of epic fantasy. Highly recommended. - School Library Connection, Highly Recommended This is the first in Claire Legrand's Empirium trilogy and readers will be left waiting with bated breath for the sequel. - Bookish.com This massive novel packs a punch. The characters are passionate and well defined. The worldbuilding is immense, colorful, exciting, and unique. The villains are horrible. The author saves a final twist for the last few pages that throws everything into line and will leave readers thirsting for the next book...This series will find a wide audience among teens, especially those who love Sarah Maas's The Court of Thorns and Roses. - VOYA Magazine
If the item details above aren’t accurate or complete, we want to know about it. Report incorrect product info.