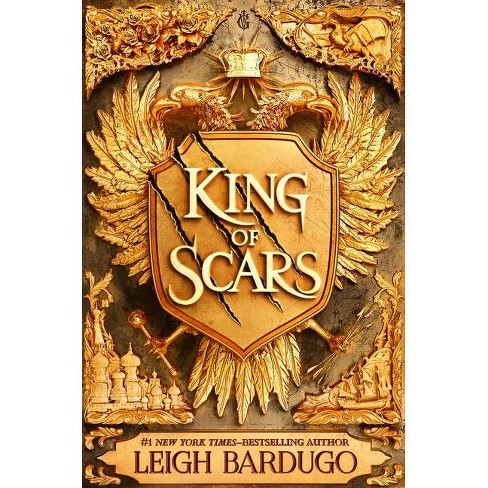 Enter the Grishaverse with the instant #1 New York Times-bestseller King of Scars by Leigh Bardugo.

Enter the Grishaverse with the instant #1 New York Times-bestseller King of Scars by Leigh Bardugo, the first book in the King of Scars Duology.

[Bardugo] touches on religion, class, family, love -- all organically, all effortlessly, all cloaked in the weight of a post-war reckoning with the cost (literal and figurative) of surviving the events that shape both people and nations. --NPR The story exists at an intersection of past and future selves, and in the dawning understanding that what you most fear may be what you most need. --Washington Post Face your demons...or feed them. The dashing young king, Nikolai Lantsov, has always had a gift for the impossible. No one knows what he endured in his country's bloody civil war--and he intends to keep it that way. Now, as enemies gather at his weakened borders, Nikolai must find a way to refill Ravka's coffers, forge new alliances, and stop a rising threat to the once-great Grisha Army. Yet with every day a dark magic within him grows stronger, threatening to destroy all he has built. With the help of a young monk and a legendary Grisha general, Nikolai will journey to the places in Ravka where the deepest magic survives to vanquish the terrible legacy inside him. He will risk everything to save his country and himself. But some secrets aren't meant to stay buried--and some wounds aren't meant to heal. An Imprint Book Read all the books in the Grishaverse! The Shadow and Bone Trilogy
(previously published as The Grisha Trilogy)
Shadow and Bone
Siege and Storm
Ruin and Rising The Six of Crows Duology
Six of Crows
Crooked Kingdom The King of Scars Duology
King of Scars The Language of Thorns: Midnight Tales and Dangerous Magic
The Severed Moon: A Year-Long Journal of Magic

[Bardugo] touches on religion, class, family, love -- all organically, all effortlessly, all cloaked in the weight of a post-war reckoning with the cost (literal and figurative) of surviving the events that shape both people and nations. --NPR

Dark, beautifully written, and full of characters who instantly get inside of your head, the first book in this new duology is an instant classic. --PopSugar Why You'll Love It: ... Leigh Bardugo continues to breathe new life into her lush fantasy world, and it's impossible to resist reading every single one.
For Fans of: Fantasy authors like Susan Dennard and Sabaa Tahir. --Paste A richly detailed and refreshingly diverse world inhabited by individuals who, for all their magical talents, are resonantly human. --The Washington Post

Deadly clever political intrigue, heart-stopping adventure, memorable characters, and several understated, hinted-at romances (how will we wait?!) come together in one glorious, Slavic-folklore infused package. Bardugo's star continues to rise. --Booklist, starred review The sharp dialogue and lovable characters continue to enthrall and bewitch long past the final chapter. With twists and revelations cleverly dispersed up until the very last page, this novel is a must-have for any book shelf. --School Library Journal, starred review Praise for the Grishaverse "A master of fantasy." -- The Huffington Post
"Utterly, extremely bewitching." --The Guardian
"The best magic universe since Harry Potter." --Bustle
"This is what fantasy is for." --The New York Times Book Review
"[A] world that feels real enough to have its own passport stamp." --NPR
"The darker it gets for the good guys, the better." --Entertainment Weekly
"Sultry, sweeping and picturesque. . . . Impossible to put down." --USA Today
"There's a level of emotional and historical sophistication within Bardugo's original epic fantasy that sets it apart." --Vanity Fair
"Unlike anything I've ever read." --Veronica Roth, bestselling author of Divergent
"Bardugo crafts a first-rate adventure, a poignant romance, and an intriguing mystery!" --Rick Riordan, bestselling author of the Percy Jackson series
"This is a great choice for teenage fans of George R.R. Martin and J.R.R. Tolkien." --RT Book Reviews

Leigh Bardugo is a #1 New York Times bestselling author of fantasy novels and the creator of the Grishaverse. With over three million copies sold worldwide, her Grishaverse spans the Shadow and Bone trilogy, the Six of Crows duology, The Language of Thorns, and King of Scars--with more to come. Her short stories can be found in multiple anthologies, including The Best of Tor.com and the Best American Science Fiction & Fantasy. Her other works include Wonder Woman: Warbringer and Ninth House. Leigh was born in Jerusalem, grew up in Southern California, and graduated from Yale University. These days she lives and writes in Los Angeles.
If the item details above aren’t accurate or complete, we want to know about it. Report incorrect product info.