Mamba Mentality : How I Play - by Kobe Bryant (Hardcover) 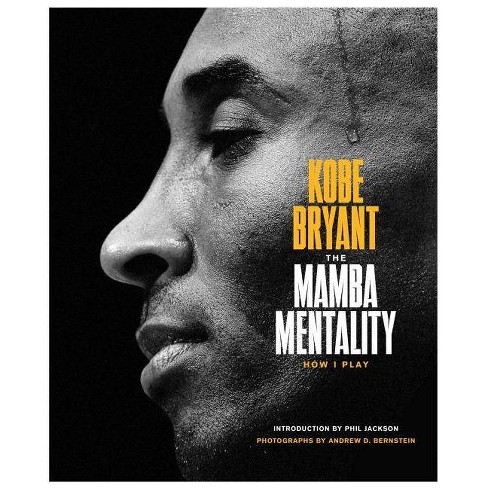 The first book from the basketball superstar Kobe Bryant--a lavish, deep dive inside the mind of one of the most revered athletes of all time

The Mamba Mentality: How I Play is Kobe Bryant's personal perspective of his life and career on the basketball court and his exceptional, insightful style of playing the game--a fitting legacy from the late Los Angeles Laker superstar.

In the wake of his retirement from professional basketball, Kobe "The Black Mamba" Bryant decided to share his vast knowledge and understanding of the game to take readers on an unprecedented journey to the core of the legendary "Mamba mentality." Citing an obligation and an opportunity to teach young players, hardcore fans, and devoted students of the game how to play it "the right way," The Mamba Mentality takes us inside the mind of one of the most intelligent, analytical, and creative basketball players ever. In his own words, Bryant reveals his famously detailed approach and the steps he took to prepare mentally and physically to not just succeed at the game, but to excel. Readers will learn how Bryant studied an opponent, how he channeled his passion for the game, how he played through injuries. They'll also get fascinating granular detail as he breaks down specific plays and match-ups from throughout his career. Bryant's detailed accounts are paired with stunning photographs by the Hall of Fame photographer Andrew D. Bernstein. Bernstein, long the Lakers and NBA official photographer, captured Bryant's very first NBA photo in 1996 and his last in 2016--and hundreds of thousands in between, the record of a unique, twenty-year relationship between one athlete and one photographer. The combination of Bryant's narrative and Bernstein's photos make The Mamba Mentality an unprecedented look behind the curtain at the career of one of the world's most celebrated and fascinating athletes.

"Warning: Be prepared for an adventure in high-level basketball ... This book is a window into the mind of someone who mastered the game." --Phil Jackson

"Kobe knew that to be the best you need a different approach from everyone else ... Enjoy this magnificent book. I have no doubt that you will be inspired." --Pau Gasol "Revealing...beautifully captured...candid." --Los Angeles Times "The future NBA Hall of Famer explores his process and craft ... From training to practice to recovery to mental preparation to highly technical descriptions of his mechanics--and those of his opponents--he delves into it all. The book will appeal to die-hard basketball fans intrigued by one of the game's brightest minds ... An ideal gift for the Lakers fan in the house." --Kirkus Reviews "Bryant is inarguably among the top 20 basketball players of all time: five-time champion, 18-time all-star, the list goes on. But overshadowing all the achievement is his legendary work ethic, drive, and devotion to the craft of basketball ... Bryant offers plenty of anecdotes about teammates and opponents. What sets this book apart from the competition is Bernstein's photography. It's wonderful." --Booklist (starred review) The next best thing to a courtside seat watching Bryant drive to the basket during his glory days with the L.A. Lakers. --USA Today Revealing, candid, inspirational. --Amazon Book Review This book will inspire you to live a Mamba Mentality way of life moving forward. The mindset of not relying on others for your own success, taking responsibility for your actions, moving according to the plan, and of course, living life to the fullest. All of this while inspiring others to push themselves to their limit as well.--Enstars Bryant has an incredibly detailed approach to preparation...not just a physical approach; it's also mental, [and it] can be applied outside of the game...Inspiring, informative, and entertaining. --Chris Schleup, The Amazon Book Review Whether someone is trying to become the next NBA great or achieve some sort of semblance of success, Bryant's dedication to being a cut above the rest is sure to help encourage readers to meet their own goals.--L.A. Taco Perfect to help the aspiring basketball player in your life learn how to excel both mentally and physically. --ESPN

Kobe Bryant (1978-2020) was one of the most accomplished and celebrated athletes of all time. Over the course of his twenty-year career--all played with the Los Angeles Lakers--he won five NBA championships, two Olympic gold medals, eighteen All-Star selections, and four All-Star Game MVP awards, among many other achievements before retiring in 2016.

In 2018, Bryant won the Academy Award for Best Animated Short Film as writer of Dear Basketball, which he also narrated. He was the first African American to win the award as well as the first former professional athlete to be nominated and win an Oscar in any category. As a philanthropist, Bryant founded the Kobe & Vanessa Bryant Family Foundation (KVBFF) and the Kobe Bryant China Fund, organizations dedicated to providing resources for educational, social, and sports programs to improve the lives of children and families in need, and encourage cultural exchanges between Chinese and U. S. middle school children. He was also an official ambassador for After-School All-Stars (ASAS), a nonprofit organization that offers after-school programs to low-income children in more than a dozen U. S. cities. With entrepreneur Jeff Stibel, Bryant co-founded Bryant Stibel, a company designed to offer businesses specializing in technology, media, and data strategies, capital, and operational support. Throughout his post-professional basketball career, Bryant claimed he'd never been beaten one-on-one. Andrew D. Bernstein's photography has appeared in thousands of newspapers and on magazine covers worldwide. Bernstein is the long-time official photographer for the Los Angeles Lakers and the senior photographer for the NBA. He is the 2018 recipient of the Curt Gowdy Media Award from the Naismith Basketball Hall Of Fame. He regularly appears on ESPN's SportsCenter and other national television and radio programs.
If the item details above aren’t accurate or complete, we want to know about it. Report incorrect product info.