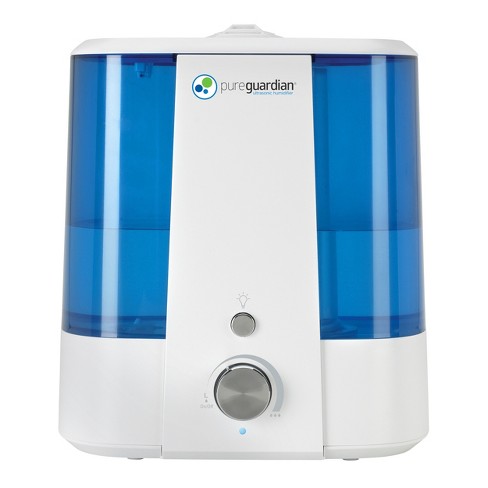 The 90-Hour* Ultrasonic Cool Mist Humidifier guards against problems caused by dry air in the home. It is ideal for use in small and medium sized rooms. Unlike other humidifiers that grow slimy mold on the water tank surface, Silver Clean Protection is embedded in the tank to fight the growth of mold and mildew on the surface of the water tank. Thanks to ultrasonic technology, it disperses a cool mist into the air, and is ultra-quiet making it ideal to have on while you sleep. This top fill humidifier has an optional aromatherapy tray so a few drops of essential oil can be added to create a relaxing atmosphere.The humidifier is equipped with a night light and variable mist control. A low water indicator light lets you know when it's time to refill the water tank. PureGuardian humidifiers create a better home environment for those suffering from colds, allergies and dry skin. Note: Run time is based off of running the unit on low speed, also depends on atmospheric conditions. PureGuardian aromatherapy oils are not included and must be purchased separately. Do not add oils to the humidifier tank as they can damage the humidifier and void the warranty. Only add essential oils to the pad that is included with the unit. Additional essential oil pads are available separately.
- Multi-Directional Mist
- 1 Essential Oil Pad included to be used in the oil tray
- Low water indicator illuminates when it's time to refill the tank
- Automatic Shutoff
- 3-year limited warranty
If the item details above aren’t accurate or complete, we want to know about it. Report incorrect product info.

2 out of 5 stars
Would not recommend
bb - 19 days ago, Verified purchaser
The great thing about this humidifier is the amount of water it holds and could last about to days on high. The biggest downside is how MOLDY becomes, I brought this humidifier because the description "Silver Clean Protection fights the growth of mold and mildew on the surface of the water tank." this is a lie because I get mold all throughout the tank, which is very hard to clean!
2.0
ease of use
out of 5
ease of use: 2 out of 5
1.0
quality
out of 5
quality: 1 out of 5
1.0
value
out of 5
value: 1 out of 5
1 guest found this review helpful. Did you?
Report review

1 out of 5 stars
Would not recommend
Claire - 7 months ago, Verified purchaser
Not good, it is not producing the mist as advertised.On high and low setting it is the same. very minimal mist. Defective. Waste of money.
5.0
ease of use
out of 5
ease of use: 5 out of 5
1.0
quality
out of 5
quality: 1 out of 5
1.0
value
out of 5
value: 1 out of 5
4 guests found this review helpful. Did you?
Report review

4 out of 5 stars
Would recommend
Teri - 10 months ago, Verified purchaser
Pretty powerful blow of mist. Power light is too bright for sleeping so we covered it. Nightlight is a different &duller light. Good size for a bedroom, although it is not the most attractive thing- clinical looking. Small area on top to aim for when refilling, even though lid opens to whole reservoir.
4.0
ease of use
out of 5
ease of use: 4 out of 5
4.0
quality
out of 5
quality: 4 out of 5
4.0
value
out of 5
value: 4 out of 5
3 guests found this review helpful. Did you?
Report review

1 out of 5 stars
Would not recommend
DEE62383 - 11 months ago
I signed up for a Target.com account just so I could leave this review. I'm going to have to compact my hatred down to 300 words, so bear with me. I would honestly give this NEGATIVE stars if that were even possible. I have had nothing but issues with both the customer service from the garbage-peddlers known as "PureGuardian" as well as from the heap of junk itself. Just three months after I purchased the unit, the problems began. One day, I turned on the machine and it emitted this loud, guttural, continuous "WHIIIIRRRRRRRRRRR!!" It sounded like metal on metal. I called customer service, and they wanted me to ship it off for repairs. I'm unable to drive, so they had UPS pick it up "just this once."They also just expected me to have a huge, empty cardboard box and shipping tape just lying around. UPS came later that day . . . and proceeded to wake up everyone in the house. But eventually, the unit made it to PureGuardian headquarters, and they eventually repaired it (or so they claimed), and shipped it back. I eventually got it back, and everything was okay again - for a few days. Then another problem started. The machine got louder, and it started also started turning off every three minutes. When this happens, the LED light glows red, which indicates a problem. So it sounds like a distant lawn mower for three minutes, then it's quiet for 3 minutes. I keep getting woken up every night, because it sounds like my neighbor is restarting his lawn mower over and over and over again, nonstop. So I called customer service yet again, and this time, they're making me find a way to print the shipping label and get to a UPS store to have it shipped off yet again - possibly on my dime. So the unit has now broken TWICE in the whopping three months I've had it, and I have to scramble to remedy the situation. I asked them if they could send me a replacement, and they refused. This "scrap pile" they call a humidifier was obviously made with cheap parts and shoddy workmanship. I took care of of this thing, and there's no reason for it to be so worthless. I kept it clean and kept the outside dry, I never exposed any of the unit to water that shouldn't have water near it, I never overfilled it, and it never got damaged in any way. I kept it on a flat, non-wooden surface, and I refilled it as needed. And it's not the store's fault, nor is this an isolated incient. There are scathing reviews all over the internet. There just is no excuse. i was going to give it ONE more try before giving up on it. But then a good friend of bought a much nicer humidifier from a different retailer. So the unit is going back to the store the first chance I get. The only reason I'm NOT going to throw this thing into a wood chipper is because I want my money back. Avoid PureGuardian altogether. Avoid it like the plague. NEVER. AGAIN.
1.0
ease of use
out of 5
ease of use: 1 out of 5
1.0
quality
out of 5
quality: 1 out of 5
1.0
value
out of 5
value: 1 out of 5
14 guests found this review helpful. Did you?
Report review

1 out of 5 stars
Would not recommend
GingerNana - 1 year ago, Verified purchaser
Stopped creating vapor within 15 minutes of use.
2 guests found this review helpful. Did you?
Report review