The Day I Die - by Anita Hannig (Hardcover) 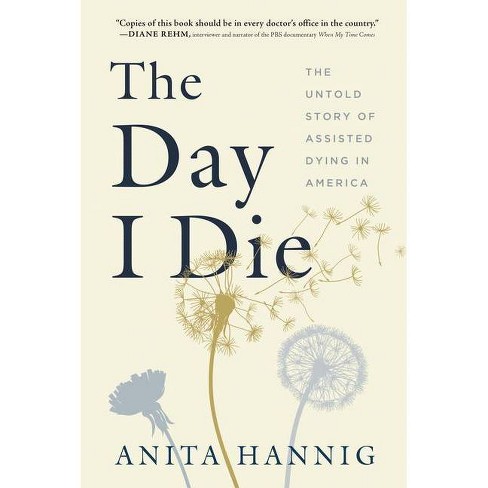 "The Day I Die is a major work of nonfiction that tackles the one issue we'll all eventually come to face--our final days, hours, and minutes. With clarity and empathy, award-winning anthropologist Anita Hannig uncovers the stigma against the practice of assisted dying, untangles the legalities and logistics of pursuing an assisted death in America today, and profiles the dedicated advocates and medical personnel involved. In intimate, lyrical detail, Hannig explains why someone might choose an assisted death and how that decision impacts their loved ones. In a time when nearly 80 percent of Americans die in hospitals and nursing homes, medical assistance in dying could transform the way we die for the better, allowing more people to define the terms of their own death"--

An intimate investigation of assisted dying in America and what it means to determine the end of our lives.

In this groundbreaking book, award-winning cultural anthropologist Anita Hannig brings us into the lives of ordinary Americans going to extraordinary lengths to set the terms of their own deaths. Faced with a terminal diagnosis and unbearable suffering, they decide to seek medical assistance in dying--a legal option now available to one in five Americans.

Drawing on five years of research on the frontlines of assisted dying, Hannig unearths the uniquely personal narratives masked by a polarized national debate. Among them are Ken, an irreverent ninety-year-old blues musician who invites his family to his death, dons his best clothes, and goes out singing; Derianna, a retired nurse and midwife who treks through Oregon and Washington to guide dying patients across life's threshold; and Bruce, a scrappy activist with Parkinson's who fights to expand access to the law, not knowing he would soon, in an unexpected twist of fate, become eligible himself.

Lyrical and lucid, sensitive but never sentimental, The Day I Die tackles one of the most urgent social issues of our time: how to restore dignity and meaning to the dying process in the age of high-tech medicine. Meticulously researched and compassionately rendered, the book exposes the tight legal restrictions, frustrating barriers to access, and corrosive cultural stigma that can undermine someone's quest for an assisted death--and why they persist in achieving the departure they desire.

The Day I Die will transform the way we think about agency and closure in the face of death. Its colorful characters remind us what we all stand to gain when we confront the hard--and yet ultimately liberating--truth of our mortality.

The Day I Die is the book we need on the next major social issue of our time--a revelation. -- Peter Richardson, Director, How to Die in Oregon

Anita Hannig bravely takes on a topic that many won't touch with a ten-foot pole. Medical aid in dying might be controversial, but it is increasingly accepted worldwide and a topic we can no longer ignore. -- Jessica Zitter, MD, MPH, author of Extreme Measures: Finding a Better Path to the End of Life and founder of Do No Harm Media

Anita Hannig presents both the history of medical aid in dying in the United States and the current reality facing individuals who wish to end their suffering in compassionate and vivid prose. With all her training and hands-on experience, she brings us details of real people trying to end their lives when they realize that nothing but misery lies ahead. Copies of this book should be in every doctor's office in the country, to educate patients and doctors themselves! -- Diane Rehm, interviewer and narrator of the PBS documentary When My Time Comes

By sharing the accounts of terminally ill individuals from all walks of life, Anita Hannig provides an honest look at the vital importance of medical aid in dying. From the perspective of patients, physicians, and family members alike, the one immutable truth that resonates is that the desire to experience a good death is simply the extension of having lived a good life. In The Day I Die, Hannig helps us recognize that, in our final chapter of life, we are likely to find our collective humanity as much as our inevitable mortality. -- Dan Diaz, Brittany Maynard's husband and advocate for end-of-life options

Of all events in a lifetime, death is the most solitary, and yet most people have no control over it. In The Day I Die, Anita Hannig investigates assisted dying. Her portrayal of people who want to have a choice at the end of their lives is calm, balanced, and devastating. -- Sallie Tisdale, author of Advice for Future Corpses
If the item details above aren’t accurate or complete, we want to know about it. Report incorrect product info.