The Fault In Our Stars (Hardcover) by John Green 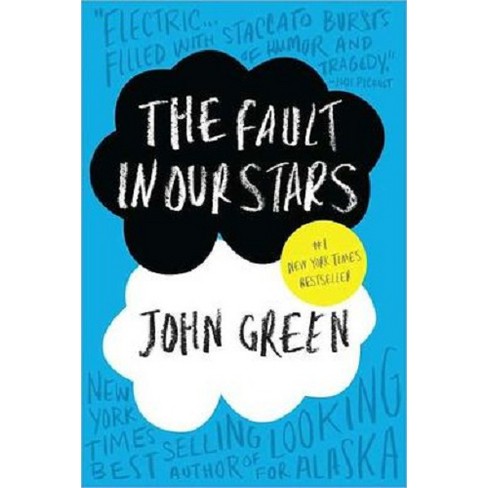 Sixteen-year-old Hazel, a stage IV thyroid cancer patient, had accepted her terminal diagnosis until a chance meeting with a boy at cancer support group forces her to reexamine her perspective on love, loss, and life.

Now a Major Motion Picture
TODAY Book Club pick
TIME magazine's #1 Fiction Book of 2012 The greatest romance story of this decade. --Entertainment Weekly -Millions of copies sold- #1 New York Times Bestseller
#1 Wall Street Journal Bestseller
#1 USA Today Bestseller
#1 International Bestseller
#1 Indie Bestseller Despite the tumor-shrinking medical miracle that has bought her a few years, Hazel has never been anything but terminal, her final chapter inscribed upon diagnosis. But when a gorgeous plot twist named Augustus Waters suddenly appears at Cancer Kid Support Group, Hazel's story is about to be completely rewritten. Insightful, bold, irreverent, and raw, The Fault in Our Stars is award-winning-author John Green's most ambitious and heartbreaking work yet, brilliantly exploring the funny, thrilling, and tragic business of being alive and in love.

CRITICAL ACCLAIM FOR THE FAULT IN OUR STARS "Damn near genius . . . The Fault in Our Stars is a love story, one of the most genuine and moving ones in recent American fiction, but it's also an existential tragedy of tremendous intelligence and courage and sadness." --Lev Grossman, TIME Magazine "This is a book that breaks your heart--not by wearing it down, but by making it bigger until it bursts."
--The Atlantic "A story about two incandescent kids who will live a long time in the minds of the readers who come to know them."
--People "Remarkable . . . A pitch-perfect, elegiac comedy."
--USA Today "A smarter, edgier Love Story for the Net Generation."
--Family Circle "Because we all need to feel first love again. . . . Sixteen-year-old Hazel faces terminal cancer with humor and pluck. But it isn't until she meets Augustus in a support group that she understands how to love or live fully."
--Oprah.com, a Best Book selection and one of "5 Books Every Woman Needs to Read Before Her Next Birthday" "[Green's] voice is so compulsively readable that it defies categorization. You will be thankful for the little infinity you spend inside this book."
--NPR.org "Hilarious and heartbreaking . . . reminds you that sometimes when life feels like it's ending, it's actually just beginning."
--Parenting magazine "John Green deftly mixes the profound and the quotidian in this tough, touching valentine to the human spirit."
--The Washington Post "[Green] shows us true love--two teenagers helping and accepting each other through the most humiliating physical and emotional ordeals--and it is far more romantic than any sunset on the beach."
--New York Times Book Review "In its every aspect, this novel is a triumph."
--Booklist, starred review
"You know, even as you begin the tale of their young romance, that the end will be 100 kinds of awful, not so much a vale as a brutal canyon of tears. . . . Green's story of lovers who aren't so much star-crossed as star-cursed leans on literature's most durable assets: finely wrought language, beautifully drawn characters and a distinctive voice."
--Frank Bruni, The New York Times "A novel of life and death and the people caught in between, The Fault in Our Stars is John Green at his best. You laugh, you cry, and then you come back for more."
--Markus Zusak, bestselling and Printz Honor-winning author of The Book Thief "The Fault in Our Stars takes a spin on universal themes--Will I be loved? Will I be remembered? Will I leave a mark on this world?--by dramatically raising the stakes for the characters who are asking."
--Jodi Picoult, bestselling author of My Sister's Keeper and Sing You Home "John Green is one of the best writers alive."
--E. Lockhart, National Book Award Finalist and Printz Honor-winning author of The Disreputable History of Frankie Landau-Banks and We Were Liars

John Green is the award-winning, #1 bestselling author of Looking for Alaska, An Abundance of Katherines, Paper Towns, Will Grayson, Will Grayson (with David Levithan), and The Fault in Our Stars. His many accolades include the Printz Medal, a Printz Honor, and the Edgar Award. He has twice been a finalist for the LA Times Book Prize. John was selected by TIME magazine as one of the 100 Most Influential People in the World. With his brother, Hank, John is one half of the Vlogbrothers (youtube.com/vlogbrothers), one of the most popular online video projects in the world. You can join the millions who follow John on Twitter (@realjohngreen) and tumblr (fishingboatproceeds.tumblr.com) or visit him online at johngreenbooks.com. John lives with his family in Indianapolis, Indiana.
If the item details above aren’t accurate or complete, we want to know about it.

The Fault in Our Stars (Reprint) (Paperback) by John Green

The Fault in Our Stars (Reprint) (Paperback) by John Green

If I Stay - by Gayle Forman

The Abduction (Hardcover) by John Grisham

The Fault in Our Stars

5 out of 5 stars
Sur - 9 years ago
I just can't say enough words about The Fault in Our Stars. This book made me laugh and cry at the same time. Honestly, I read this book 3 times over the course of a week, it's that good. If anyone is looking for a book to read, The Fault in Our Stars is a good choice. FIVE STARS ALL THE WAY!!!!!!
10 guests found this review helpful. Did you?

One of the Best Books Ever

5 out of 5 stars
SLynn - 9 years ago
This book will make you feel so many emotions. It has humor, shock, romance, tragedy, and hope. The theme of children with cancer is always a tough one to tackle but I feel that John Green addresses it well. This store grabs you from the first page and doesn't let go, even after you close the back cover. Be warned: you will need tissues. I bought a whole box in anticipation of reading this book (I didn't go through the whole box but there was a small mountain of them by the time I was done). I would recommend this to anyone aged 13 onwards.
10 guests found this review helpful. Did you?

The Fault in Our Stars

5 out of 5 stars
Toria - 9 years ago
I read this book about two years ago, and fell in love with itself and the author. Its by far, the best teen novel I've ever read. I'm so glad its getting the attention it desires, and I can't wait for the movie!! :D
9 guests found this review helpful. Did you?

5 out of 5 stars
Danielle - 9 years ago
One of the best books i've read in a while. Great plot and really got into the book. Happy and sad at the same time
5 guests found this review helpful. Did you?

5 out of 5 stars
Brittney - 9 years ago
This was the best book I've ever read. i suggest it to everyone. Its got a beautiful story line. Nothing like I've ever read before. Great book, you wont regret buying it.
14 guests found this review helpful. Did you?

5 out of 5 stars
luv2run8 - 10 years ago
Oh goodness. Where to start. This book was certainly not what I expected when I started it, but I was not disappointed. It really got into my head, and made me think a lot in general. The book had me sobbing uncontrollably by the end, and long after I was finished the tears continued. A great read.
17 guests found this review helpful. Did you?