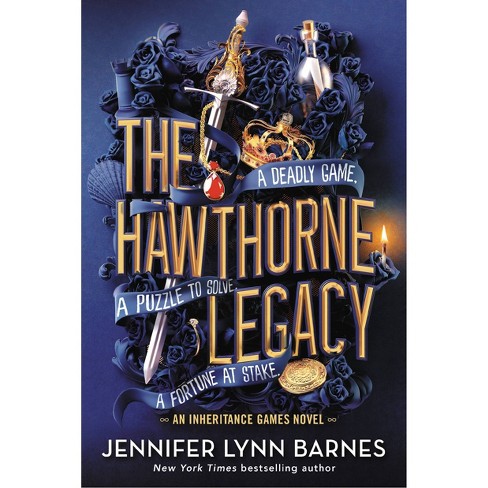 Rumors spread that Tobias Hawthorne's lost son may still be alive, casting doubt on seventeen-year-old Avery's inheritance and changing the rules of the game.

Intrigue, riches, and romance abound in this thrilling sequel to the New York Times bestselling The Inheritance Games

The Inheritance Games ended with a bombshell, and now heiress Avery Grambs has to pick up the pieces and find the man who might hold the answers to all of her questions--including why Tobias Hawthorne left his entire fortune to Avery, a virtual stranger, rather than to his own daughters or grandsons. Thanks to a DNA test, Avery knows that she's not a Hawthorne by blood, but clues pile up hinting at a deeper connection to the family than she had ever imagined. As the mystery grows and the plot thickens, Grayson and Jameson, two of the enigmatic and magnetic Hawthorne grandsons, continue to pull Avery in different directions. And there are threats lurking around every corner, as adversaries emerge who will stop at nothing to see Avery out of the picture--by any means necessary. With nonstop action, aspirational jet-setting, Knives Out-like family intrigue, swoonworthy romance, and billions of dollars hanging in the balance, The Hawthorne Legacy will thrill Jennifer Lynn Barnes fans and new readers alike.

"Barnes is a master of puzzles and plot twists. The Inheritance Games was the most fun I've had all year."--E. Lockhart, bestselling author of We Were Liars and Again Again

"Barnes's meticulously crafted novel is like the film Knives Out for the YA world, perfect for any reader seeking suspense, romance, and glamour.... Barnes crafts high-stakes tension, a swoony love triangle, and a large but memorable cast of characters. Fun and fast-paced, fans of Karen M. McManus's One of Us is Lying and Maureen Johnson's Truly Devious will find a new home at Hawthorne House."--SLJ

[A] well-characterized mystery that's packed to the brim with twists and tricks. Hand immediately to teen fans of Knives Out or readers who love Maureen Johnson's Truly Devious series.--Booklist

Prickly, witty, and stubborn as a mule, Avery is an eminently likable protagonist, and her savvy ability to manage the obnoxiously privileged people she suddenly finds herself surrounded by is admirable, helped plenty by her quippy one-liners that level even the snobbiest among them.--BCCB

Jennifer Lynn Barnes is the New York Times bestselling author of more than twenty acclaimed young adult novels, including The Inheritance Games, Little White Lies, Deadly Little Scandals, The Lovely and the Lost, and The Naturals series: The Naturals, Killer Instinct, All In, Bad Blood and the e-novella, Twelve. Jen is also a Fulbright Scholar with advanced degrees in psychology, psychiatry, and cognitive science. She received her Ph.D. from Yale University in 2012 and is currently a professor of psychology and professional writing at the University of Oklahoma. You can find her online at www.jenniferlynnbarnes.com or follow her on Twitter @jenlynnbarnes.
If the item details above aren’t accurate or complete, we want to know about it. Report incorrect product info.