The Cruel Prince - (Folk of the Air) by Holly Black (Paperback) 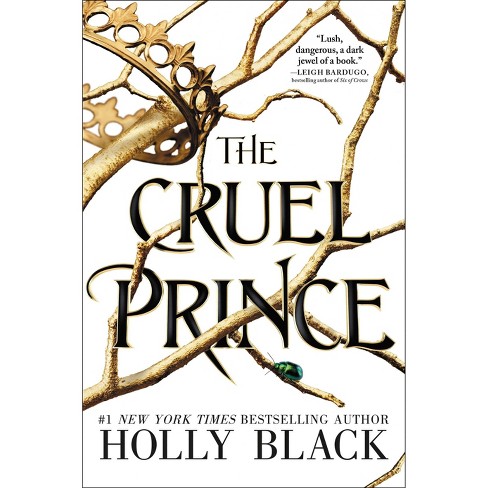 An instant bestseller from #1 "New York Times"-bestselling author Black--the first book in her Folk of the Air series about a mortal girl who finds herself caught in a web of royal faerie intrigue.igue.

By #1 New York Times bestselling author Holly Black, the first book in a stunning new series about a mortal girl who finds herself caught in a web of royal faerie intrigue. Of course I want to be like them. They're beautiful as blades forged in some divine fire. They will live forever. And Cardan is even more beautiful than the rest. I hate him more than all the others. I hate him so much that sometimes when I look at him, I can hardly breathe. Jude was seven years old when her parents were murdered and she and her two sisters were stolen away to live in the treacherous High Court of Faerie. Ten years later, Jude wants nothing more than to belong there, despite her mortality. But many of the fey despise humans. Especially Prince Cardan, the youngest and wickedest son of the High King. To win a place at the Court, she must defy him--and face the consequences. In doing so, she becomes embroiled in palace intrigues and deceptions, discovering her own capacity for bloodshed. But as civil war threatens to drown the Courts of Faerie in violence, Jude will need to risk her life in a dangerous alliance to save her sisters, and Faerie itself.

* Another fantastic, deeply engaging, and all-consuming work from Black that belongs on all YA shelves.--School Library Journal, starred review

* Black, quite rightly, is the acknowledged queen of faerie lit, and her latest shows her to be at the top of her game, unveiling twists and secrets and bringing her characters vividly to life.--VOYA, starred review

* Jude, who struggles with a world she both loves and hates and would rather be powerful and safe than good, is a compelling narrator. Whatever a reader is looking for--heart-in-throat action, deadly romance, double-crossing, moral complexity--this is one heck of a ride.--Booklist, starred review

Black has a compelling series about fairies, politics and finding your place in the world, starting with this novel, which I read in a single day.--USA Today

Black is a master at world-building, conveying integral details without that information ever seeming tedious or encyclopedic, whether you're well versed in faerie or a newcomer to the genre....the experience of reading a novel like this is something like being surrounded by magic.--The New York Times Book Review

Lush, dangerous, a dark jewel of a book. Black's world is intoxicating, imbued with a relentless sense of peril that kept me riveted through every chapter of Jude's journey. And Jude! She is a heroine to love--brave but pragmatic, utterly human. This delicious story will seduce you and leave you desperate for just one more page.--Leigh Bardugo, #1 New York Times bestselling author of Six of Crows and Crooked Kingdom

This is a heady blend of Faerie lore, high fantasy, and high school drama, dripping with description that brings the dangerous but tempting world of Faerie to life. Black is building a complex mythology; now is a great time to tune in.--Kirkus Reviews

With complicated characters, a suspenseful plot, and a successful return to the Faerie setting of many of her popular books, Black's latest is sure to enchant fans.--The Horn Book

Holly Black is the bestselling author of contemporary fantasy novels for teens and children, including Tithe: A Modern Faerie Tale and the #1 New York Times bestselling Spiderwick series. She has been a finalist for the Mythopoeic Award and the Eisner Award, and the recipient of the Andre Norton Award. Holly lives in Massachusetts with her husband, Theo, in a house with a secret library. Her website is www.blackholly.com.
If the item details above aren’t accurate or complete, we want to know about it. Report incorrect product info.