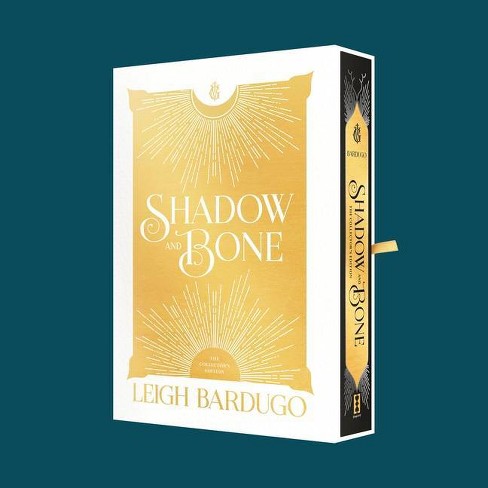 Read from the beginning with this beautiful deluxe collector's edition of the first novel in the worldwide-bestselling Shadow and Bone Trilogy by Leigh Bardugo. This edition features brand-new artwork, a hardcover slipcase with exclusive design, a ribbon pull, and more.

See the Grishaverse come to life on screen with Shadow and Bone, now a Netflix series.

Read from the beginning with this beautiful deluxe collector's edition of the first novel in the worldwide-bestselling Shadow and Bone Trilogy by Leigh Bardugo. This edition features brand-new artwork, a hardcover slipcase with exclusive design, a ribbon pull, and more. Soldier. Summoner. Saint. Orphaned and expendable, Alina Starkov is a soldier who knows she may not survive her first trek across the Shadow Fold--a swath of unnatural darkness crawling with monsters. But when her regiment is attacked, Alina unleashes dormant magic not even she knew she possessed. Now Alina will enter a lavish world of royalty and intrigue as she trains with the Grisha, her country's magical military elite--and falls under the spell of their notorious leader, the Darkling. He believes Alina can summon a force capable of destroying the Shadow Fold and reuniting their war-ravaged country, but only if she can master her untamed gift. As the threat to the kingdom mounts and Alina unlocks the secrets of her past, she will make a dangerous discovery that could threaten all she loves and the very future of a nation. Welcome to Ravka . . . a world of science and superstition where nothing is what it seems. A New York Times Bestseller
A Los Angeles Times Bestseller
An Indie Next List Book
This title has Common Core connections. Read all the books in the Grishaverse! The Shadow and Bone Trilogy
(previously published as The Grisha Trilogy)
Shadow and Bone
Siege and Storm
Ruin and Rising The Six of Crows Duology
Six of Crows
Crooked Kingdom The King of Scars Duology
King of Scars
Rule of Wolves The Language of Thorns: Midnight Tales and Dangerous Magic
The Severed Moon: A Year-Long Journal of Magic
The Lives of Saints Praise for the Grishaverse "A master of fantasy." --The Huffington Post
"Utterly, extremely bewitching." --The Guardian
"This is what fantasy is for." --The New York Times Book Review
"[A] world that feels real enough to have its own passport stamp." --NPR
"The darker it gets for the good guys, the better." --Entertainment Weekly
"Sultry, sweeping and picturesque. . . . Impossible to put down." --USA Today
"There's a level of emotional and historical sophistication within Bardugo's original epic fantasy that sets it apart." --Vanity Fair
"Unlike anything I've ever read." --Veronica Roth, bestselling author of Divergent
"Bardugo crafts a first-rate adventure, a poignant romance, and an intriguing mystery!" --Rick Riordan, bestselling author of the Percy Jackson series

Leigh Bardugo is the New York Times-bestselling author of Ninth House and the creator of the Grishaverse, which spans the Shadow and Bone trilogy (now a Netflix series), the Six of Crows duology, the King of Scars duology, The Language of Thorns, and The Lives of Saints - with more to come. Her short stories can be found in multiple anthologies, including The Best American Science Fiction and Fantasy. She lives in Los Angeles.
If the item details above aren’t accurate or complete, we want to know about it. Report incorrect product info.