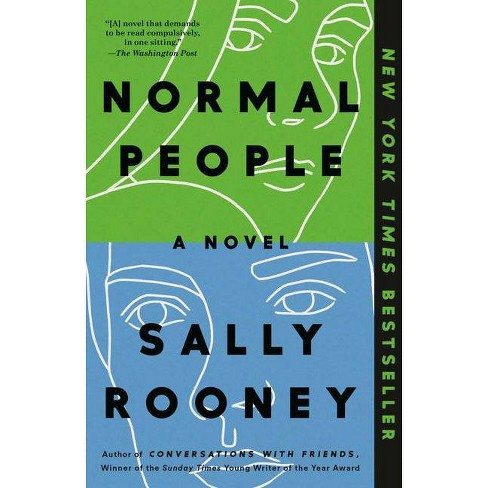 "Originally published in hardcover in the United Kingdom by Faber & Faber, London, in 2018 and in the United States by Hogarth, an imprint of Random House, a division of Penguin Random House LLC, in 2019"--Title page verso.

NOW AN EMMY-NOMINATED HULU ORIGINAL SERIES - NEW YORK TIMES BESTSELLER - "A stunning novel about the transformative power of relationships" (People) from the author of Conversations with Friends, "a master of the literary page-turner" (J. Courtney Sullivan). ONE OF THE TEN BEST NOVELS OF THE DECADE--Entertainment Weekly

AND BEST BOOKS OF THE YEAR--The New York Times, The New York Times Book Review, O: The Oprah Magazine, Time, NPR, The Washington Post, Vogue, Esquire, Glamour, Elle, Marie Claire, Vox, The Paris Review, Good Housekeeping, Town & Country Connell and Marianne grew up in the same small town, but the similarities end there. At school, Connell is popular and well liked, while Marianne is a loner. But when the two strike up a conversation--awkward but electrifying--something life changing begins. A year later, they're both studying at Trinity College in Dublin. Marianne has found her feet in a new social world while Connell hangs at the sidelines, shy and uncertain. Throughout their years at university, Marianne and Connell circle one another, straying toward other people and possibilities but always magnetically, irresistibly drawn back together. And as she veers into self-destruction and he begins to search for meaning elsewhere, each must confront how far they are willing to go to save the other. Normal People is the story of mutual fascination, friendship and love. It takes us from that first conversation to the years beyond, in the company of two people who try to stay apart but find that they can't.

Praise for Normal People "[A] novel that demands to be read compulsively, in one sitting."--The Washington Post

"Arguably the buzziest novel of the season, Sally Rooney's elegant sophomore effort . . . is a worthy successor to Conversations with Friends. Here, again, she unflinchingly explores class dynamics and young love with wit and nuance."--The Wall Street Journal "[Rooney] has been hailed as the first great millennial novelist for her stories of love and late capitalism. . . . [She writes] some of the best dialogue I've read."--The New Yorker

"[Rooney] has invented a sensibility entirely of her own: sunny and sharp, free of artifice but overflowing with wisdom and intensity. . . . The novel touches on class, politics, and power dynamics and brims with the sparky, witty conversation that Rooney's fans will recognize."--Vogue "A future classic."--The Guardian "Rooney is a tough girl; her papercut-sharp sensibility is much more akin to writers like Rachel Kushner, Mary Gaitskill, and the pre-Manhattan Beach Jennifer Egan. . . . Normal People is a nuanced and flinty love story about two young people who 'get' each other, despite class differences and the interference of their own vigorous personal demons. But honestly, Sally Rooney could write a novel about bath mats and I'd still read it. She's that good and that singular a writer."--Maureen Corrigan, NPR's Fresh Air "[Rooney] has written two fresh and accessible novels. . . . There is so much to say about Rooney's fiction--in my experience, when people who've read her meet they tend to peel off into corners to talk."--Dwight Garner, The New York Times "[Rooney's] two carefully observed and gentle comedies of manners . . . are tender portraits of Irish college students. . . . Remarkably precise--she captures meticulously the way a generation raised on social data thinks and talks."--New York Review of Books "Normal People tackles millennial concerns with nineteenth-century wit . . . the millennial generation would no doubt be happy to accept her as its spokesperson were she so inclined."--Elle "I'm transfixed by the way Rooney works, and I'm hardly the only one . . . like any confident couturier, she's slicing the free flow of words into the perfect shape. . . . She writes about tricky commonplace things (text messages, sex) with a familiarity no one else has."--The Paris Review "Funny and intellectually agile . . . [combines] deft social observation--especially of shifts of power between individuals and groups--with acute feeling . . . [Rooney is] a master of the kind of millennial deadpan that appears to skewer a whole life and personality in a sentence or two."--Harper's Magazine "Beautifully observed . . . crackles with vivid insight into what it means to be young and in love today."--Esquire "I went into a tunnel with this book and didn't want to come out. Absolutely engrossing and surprisingly heart-breaking with more depth, subtlety, and insight than any one novel deserves. Young love is a subject of much scorn, but Rooney understands the cataclysmic effects our youth has on the people we become. She has restored not only love's dignity, but also its significance."--Stephanie Danler, author of Sweetbitter "Masterfully done. The quality of Rooney's writing, particularly in the psychologically wrought sex scenes, cannot be understated as she brilliantly provides a window into her protagonists' true selves."--BookPage (starred review)

Sally Rooney was born in the west of Ireland in 1991. Her work has appeared in The New Yorker, The New York Times, Granta and The London Review of Books. Winner of the Sunday Times Young Writer of the Year Award, she is the author of Conversations with Friends. In 2019, she was named to the inaugural Time 100 Next list.
If the item details above aren’t accurate or complete, we want to know about it. Report incorrect product info.